Dubbed as one of 15 hottest celebrity couples back in 2011, Boris Kodjoe and Nicole Ari Parker are still madly in love.

Boris has put his love in writing again. For their seventh anniversary he surprised his lovely wife with a poem titled “My Seven Year Itch.” 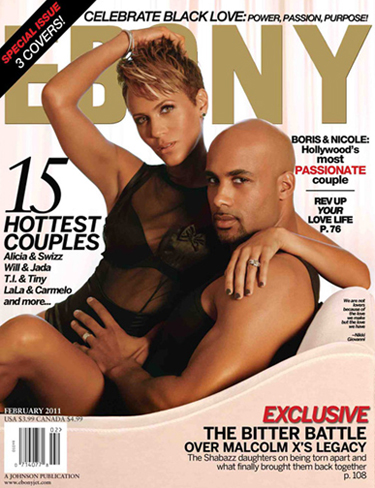 Soul Food fans around the world fell in love with Boris Kojoe, and Nicole Ari Parker’s on and off-screen love. They quickly realized they shared chemistry both on and off screen. The pair is regarded by many as eye candy and the picture perfect couple. Their love story has become a rare example of lasting love in Hollywood.

She says, "When Boris walked into our first rehearsal, I thought of him as the really hot guy that got to play my boyfriend in the first couple episodes," reports YBF. "But for some reason we connected and found it easy to talk to each other and laugh and be comfortable… and then I married him. Vanessa called it from the beginning just like a sister would."

Boris and Nicole were married on May 21, 2005 in Gundelfingen, a few months after their first child, daughter Sophie Tei Naaki Lee was born. They also have a son named Nelson. The proud parents have a very busy lifestyle as they work on their careers, entrepreneurship, and their charity, Sophie's Voice Foundation, founded in 2008 in honor of their daughter who suffers from Spina Bifida.

Nicole has been extremely busy starring in A Streetcar Named Desire on Broadway. She plays the role of Blanch Dubois alongside an impressive cast that includes two-time Golden Globe nominee Blair Underwood.

You've always been my itch, so many ways you've touched my body, mind and soul from the moment He designed our paths to cross, finally.

You've always been my itch, so good to me I've wanted you day after day, night after night, making me wonder how my body was able to be without you all this while, before our very first touch.

You've always been my itch, giving wings to my thoughts, encouraging them to unforeseen heights, where I would build our castle in the sky, fit for a king and his queen.

You've always been my itch, filling my spirit with comfort and peace like I hadn't felt since a child in Oma's garden, so familiar and yet so new.

You've always been my itch. My seven year, seven days a week, 24/7 itch I always want, desire, crave, and never ever want to be without.
Not for seven seconds.

Nicole,
Happy 7th anniversary
Let's do this again
I love you more

It’s ironic to say the least that Nicole Ari Parker is a seven-time NAACP image award nominee. Yesterday, Boris and Nicole celebrated seven years of marital bliss. We wish them many, many more. Join us in wishing the Kodjoes a happy anniversary and a lifetime of love and happiness.