Jannora and Miles met in Miami in 2012 during spring break while Jannora was a student at The University of Maryland and Miles was a student at Alabama A&M. "He's a member of Kappa Alpha Psi Fraternity, and I was with my girlfriends and a few guy friends who are in the same fraternity. Miles and his frat brothers saw us and joined us on the beach; we all randomly saw each other again that night and exchanged information," recalled Jannora.  The two continued to keep in touch, and in 2013, Miles happened to be in visiting Maryland for an engineering conference and was able to make it to Jannora's going away party. "After that, we would talk on the phone every day, all day. I even stopped in Alabama to visit before I moved to Texas. We just became really great friends and would visit one another in our respective states," said Jannora.  A few months later, the two went to New Orleans for Miles' birthday and it was then that they both shared their love for each other and decided to take their friendship to the next level. A year later Jannora made the move to Alabama to be closer to her love. Check out their chic Alabama engagement session, captured by Elle Danielle Photography.

Wedding theme: Our wedding will have a couple traditional moments but is far from it; it represents who we are as a couple and will be a very elegant affair. 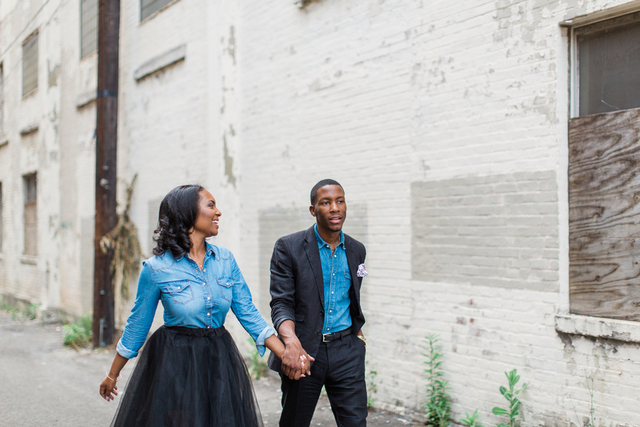 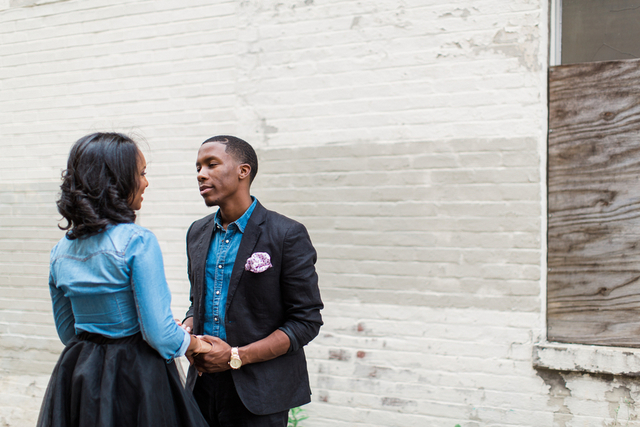 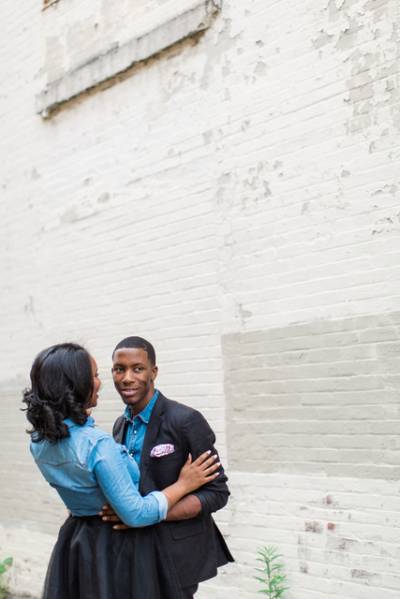 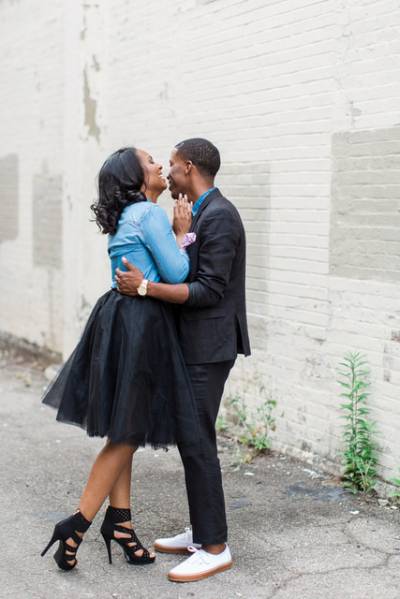 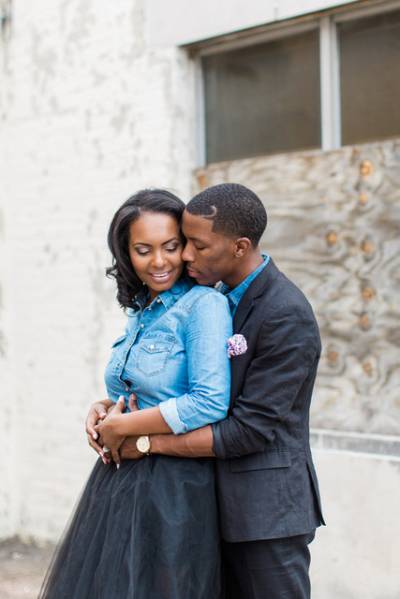 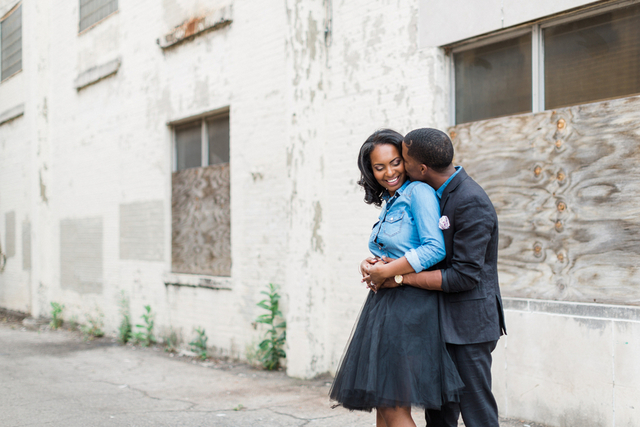 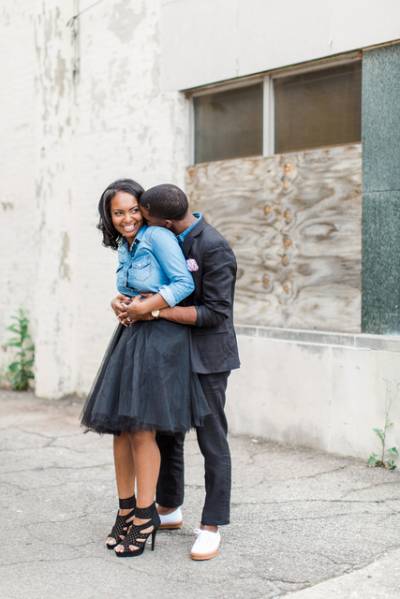 This past May, we went to New York for my birthday where I had my best friends and his best friend come to celebrate with us for the weekend. I am from New Jersey and wanted to be in that area for my 25th. We went to a poetry spot, Nuyorican Poets Cafe, and he got up and read a poem he wrote for me after midnight hit and it was officially my birthday. He performed for me the previous year so I figured we were starting a tradition. I was on the stage with him because he told me he had some dialogue I would be a part of for his poem. The title of the poem was "Mary and Me" and during the last line he pulled a box out of his pocket and asked, "So how do you feel about marrying me?" I was literally speechless. I just couldn't get the word “Yes” out because I was so surprised and thankful that this man God sent to me felt as strongly about me as I do him. He must have been on his knee for about five minutes because I was so busy crying and in a state of shock. Then he pointed and showed me that my whole family was there to witness and the tears started pouring out even more. I'm getting emotional now just thinking about it. It was so perfect! I’m usually the planner in the relationship and it was such a surprise to know he made sure the most important people in my life were present for our special moment. 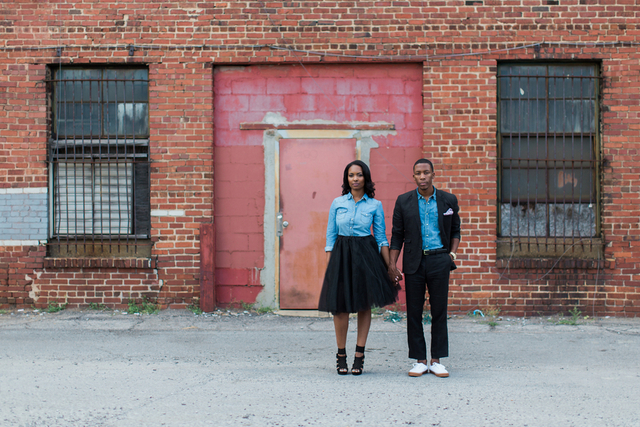 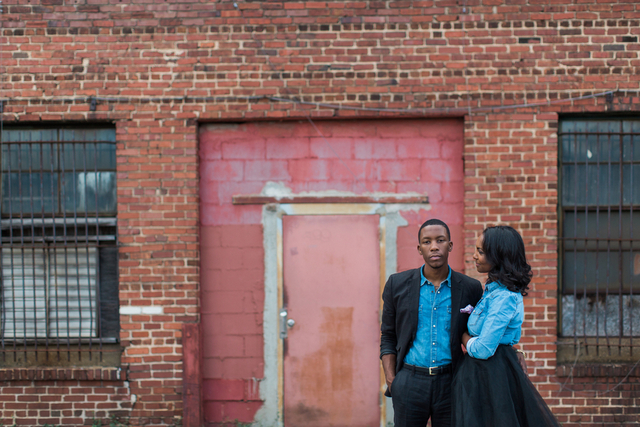 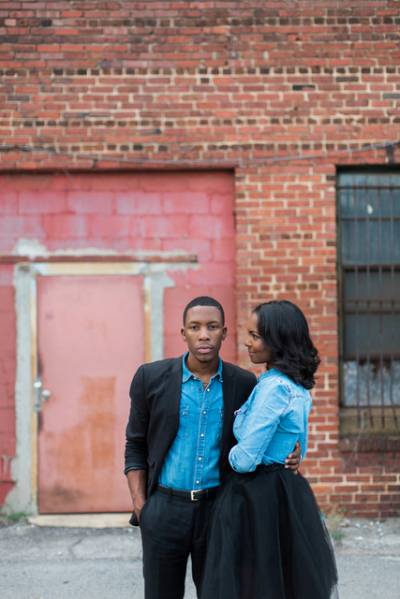 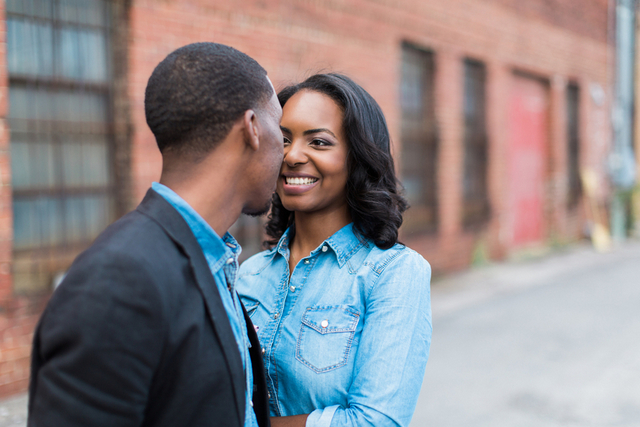 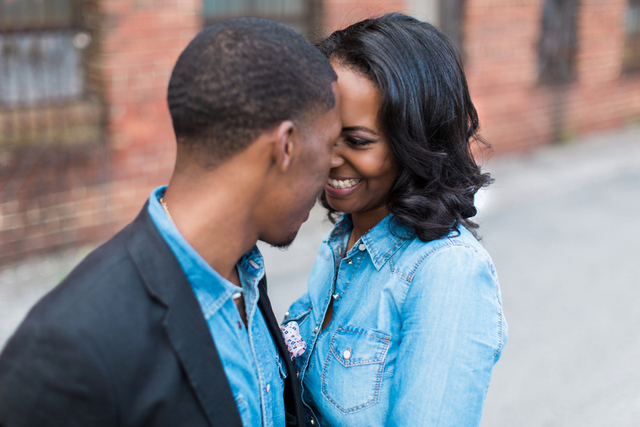 Initially I wanted to take her somewhere outside the US to propose, but I knew that she was very close to her family and friends back home and would love for them to be able to experience that moment. So about a year in advance I planted the thought of us going to New York for her 25th birthday so that we could celebrate with all of her friends. She doesn't get to see them as often since she moved to Alabama, so she immediately embraced the idea. So now we turn over to Chapter 2: The Ring Shopping Chronicles. Jannora had shown me at least 37 wedding magazines before the actual proposal, so I had a pretty good idea of the style and cuts she liked. I shopped around at about 5 or 6 stores until I found the right one. Rewinding back to May 17, 2014 (her 24th birthday) I remembered performing a poem that I wrote at The Foreign Exchange Experience in downtown Birmingham. I remembered that we had talked about making this a tradition for her birthday every year, so I saw this as a perfect opportunity to set something up for the big day in New York. Following that train of thought, I called Dii Lewis at the Nuyorican Poetry Club in New York to set up the whole thing. Dii Lewis and her Crew really helped me out. Everything from finding places to hide her family to scheduling my performance on May 16th to start at midnight so that the proposal could actually take place on her birthday. Fast Forward to Spring 2015; we're approaching the big day; writer's block at an all time high and I still don't have my piece written. Jannora's mom and a few of her friends from college contacted everyone and helped make the planning a lot easier. Jannora didn't think her parents would be able to come because of their work schedules so her mom and I made plans for them to attend without being seen. We finally flew out to New York for her birthday weekend and met up with all of her friends. We had a great time going out and celebrating for her birthday. It was almost like a reunion for her which was cool to see. After a few days of partying and exploring the city, it was finally time to head to The Nuyorican to perform my piece. We watched all of the other performers for about 2 hours. I heard my name being called out on the mic and my legs turned to Jello. I had to play it cool because my suit was too clean to pass out on the floor. I got on the stage and started going over my lines in my head. It sounded pretty smooth in my head, but my mouth didn't want to cooperate. I performed the first 6 or 7 lines and my mind went blank! At this point, I'm trying not to panic. Luckily my Line Brother Alvin had a copy of the poem in his phone so he helped me out from the crowd. The Title of the poem was called "Me and Mary" so at the end of the poem I turned to her, got on one knee and asked…"how do you feel about Mary and Me?" (Marrying Me). The crowd cheered as D'Angelo – "Really Love" played in the background. She broke into tears and said YES. I felt like a bus had been lifted off my shoulders. Her mom and the rest of her family (who she didn't know was coming) came down from the balcony and surprised her (then she started crying again). We took pictures and just basked in the moment for a while. That was by far the most amazing thing I've ever experienced in m
y life. 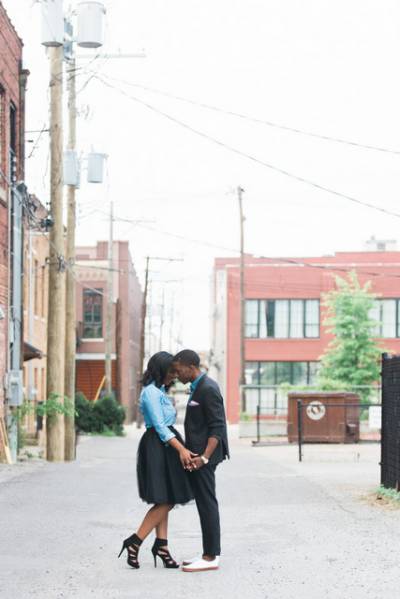 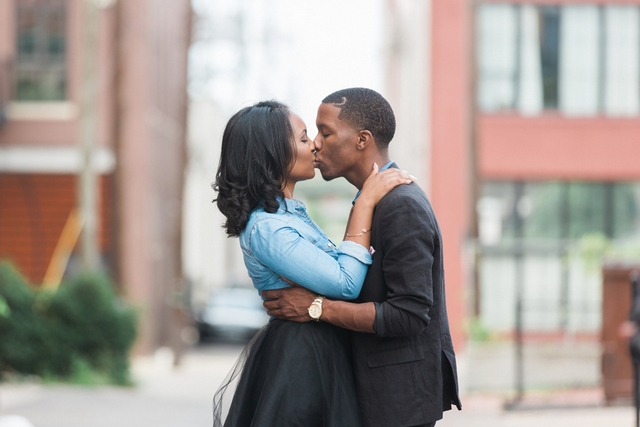 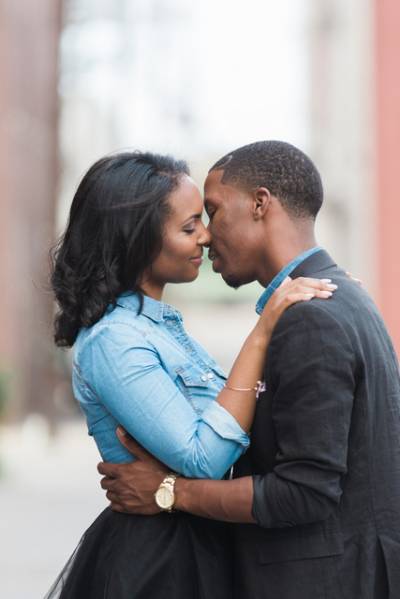 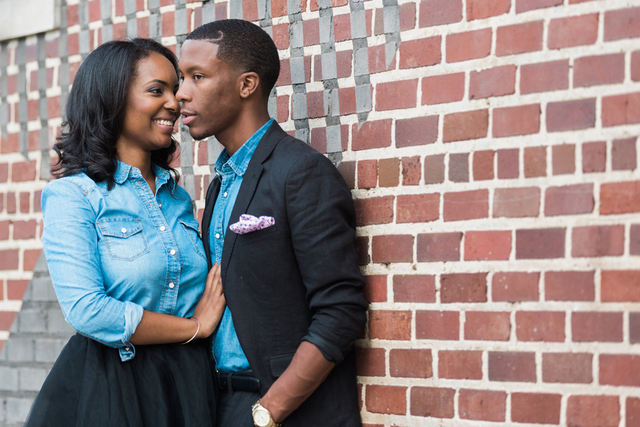 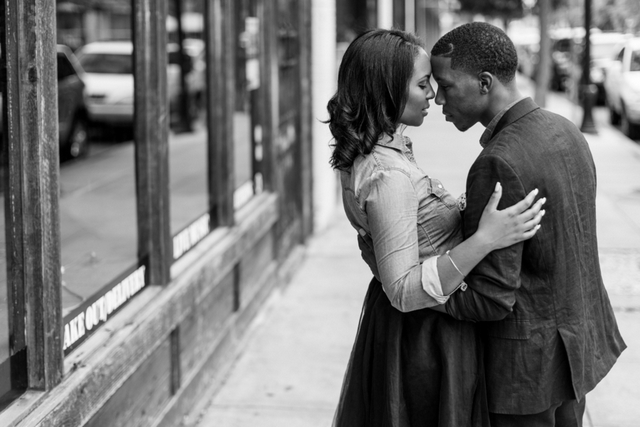 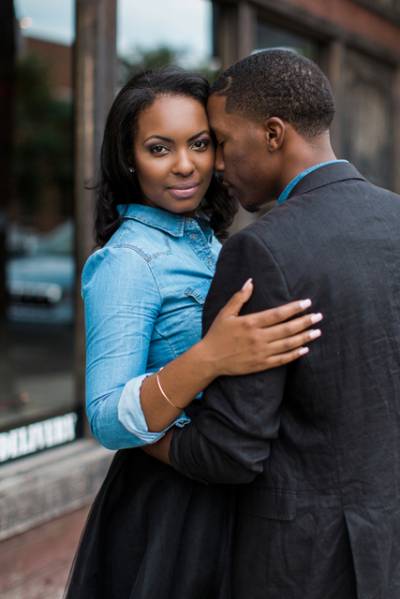 Jannora — What makes our love special is that we keep God first and strive to grow closer to Him while we continue to grow closer to one another, each and every day. We help each other be strong in the areas we are weak and we are uniquely us. We don’t pretend that a perfect relationship is effortless, but we put in the work to make sure it is strong and everlasting.

Miles –Our love is special because it happened very organically from the beginning. I think it's very rare nowadays to find someone who is genuine and willing to constantly put forth an effort to improve themselves and their significant others simultaneously. I just feel like God put us together at the perfect time and offset our strengths and weaknesses to help build each other. Our love is special because it has been centered around God and as we grow closer to Him we grow closer to each other. 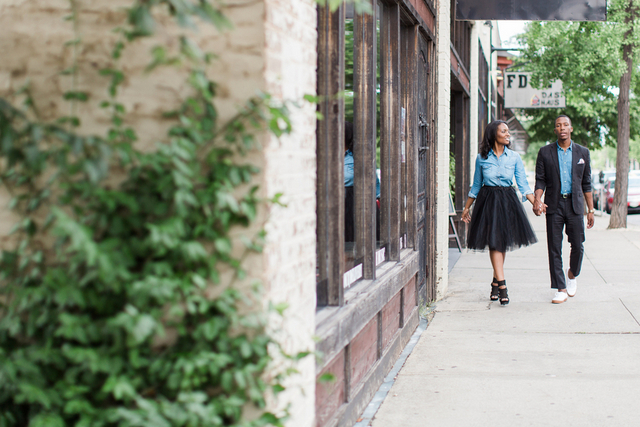 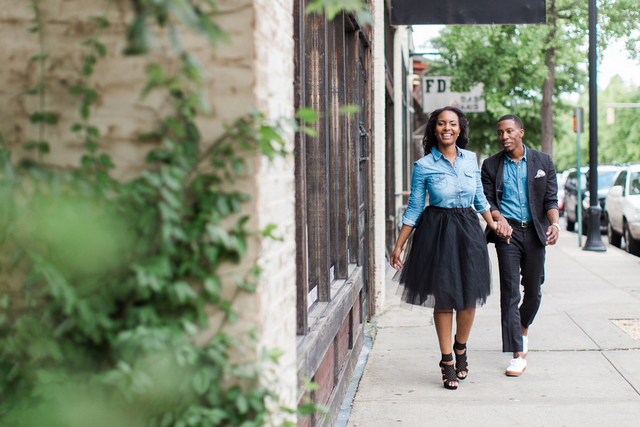 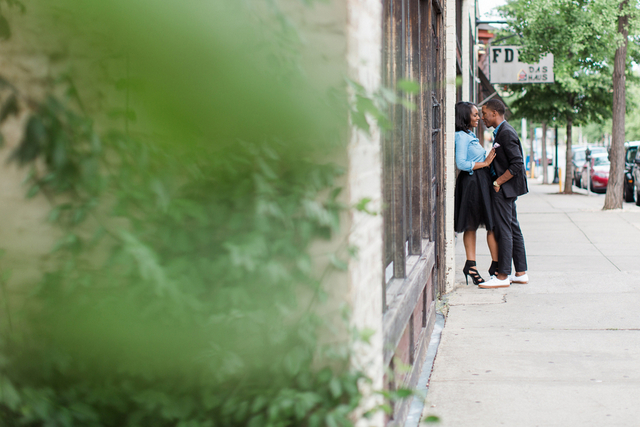 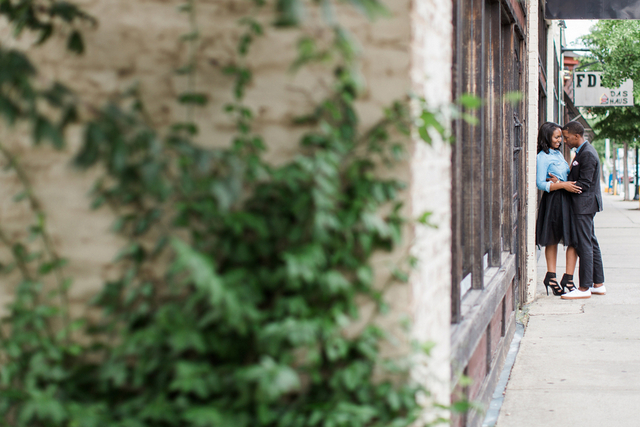 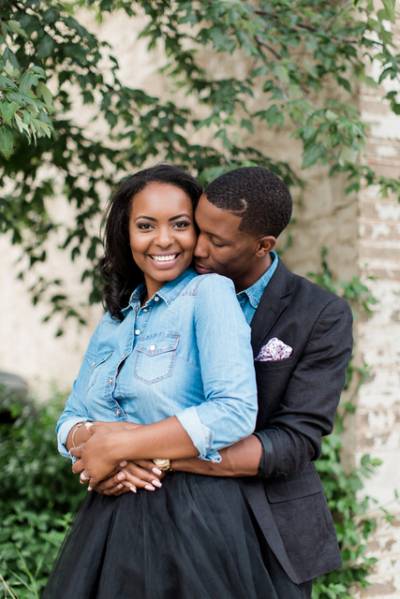 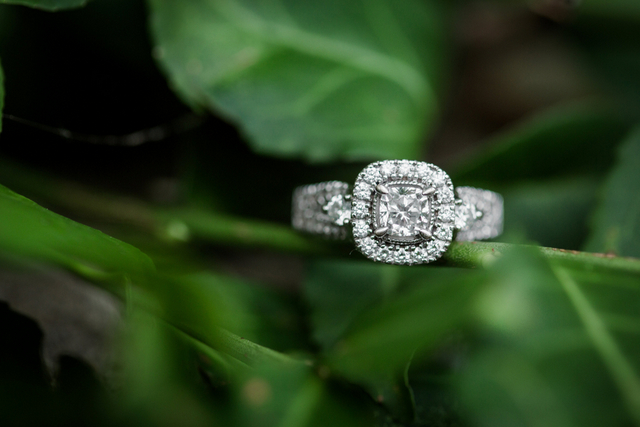 Jannora — I am mostly looking forward to the moment I walk out and see Miles standing at the end of the aisle waiting for me to join him.

Miles — I'm really looking forward to seeing that beautiful smile while she's walking down the aisle. I love the way her face lights up when she's really happy.

Yes, we’ve started planning and have accomplished so much so far due to our amazing wedding planner Joanna.

Congrats to the happy couple Jannora and Miles! We wish you a wonderful wedding and marriage. 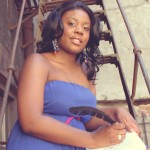 Curated by our Wedding Features Editor, C.K. Alexander. C.K. is the creator of the Single Bride Blog and the  owner and founder of  Love Ink and Brownstone Bridal. Keep up with C.K. on Twitter here: @Love_Ink