After graduating from law school, Lauren took the bar exam in July 2014. She was locked in the house all summer studying, so after completing the exam she went to New York City to celebrate her newfound freedom with one of her girlfriends. They went out partying in lower Manhattan, and Lauren locked eyes with a cute guy named Jonathan in a crowded bar. They spent the rest of the night trading stories about their travels and exchanged numbers. However, Lauren was living in Washington, D.C. at the time, while he was a Bronx native, so she didn't expect to see him again anytime soon. But they kept texting, and he asked her out right away. They agreed to meet in Philly for their first date to split the hundreds of miles between them. Jonathan took Lauren dancing in Old City to end a perfect first date, and the rest is history. They married four years later and commemorated their union with a honeymoon in Bali. Check out their memorable occasion, captured by Gusmank Wedding Photography.

How long have you been together? Four years and counting! 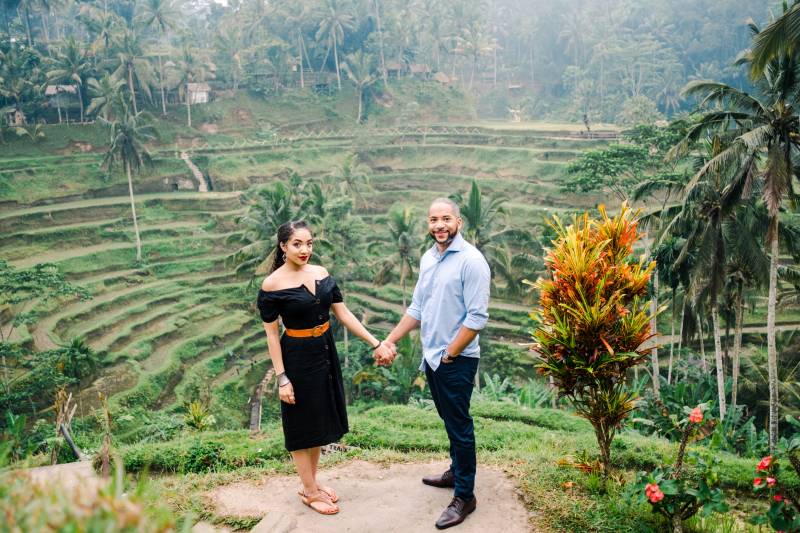 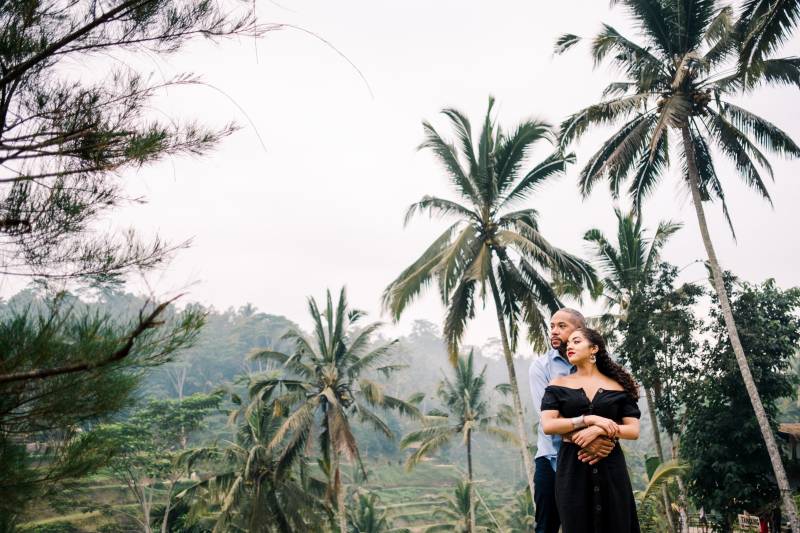 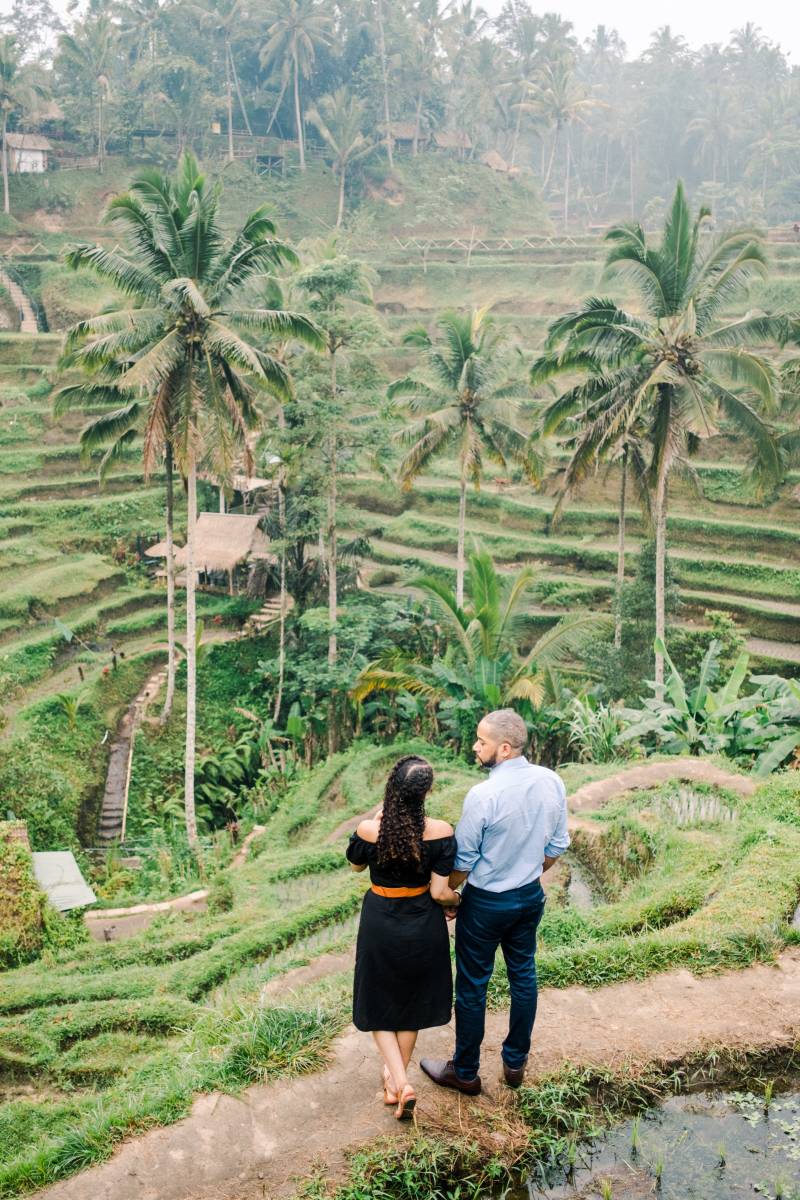 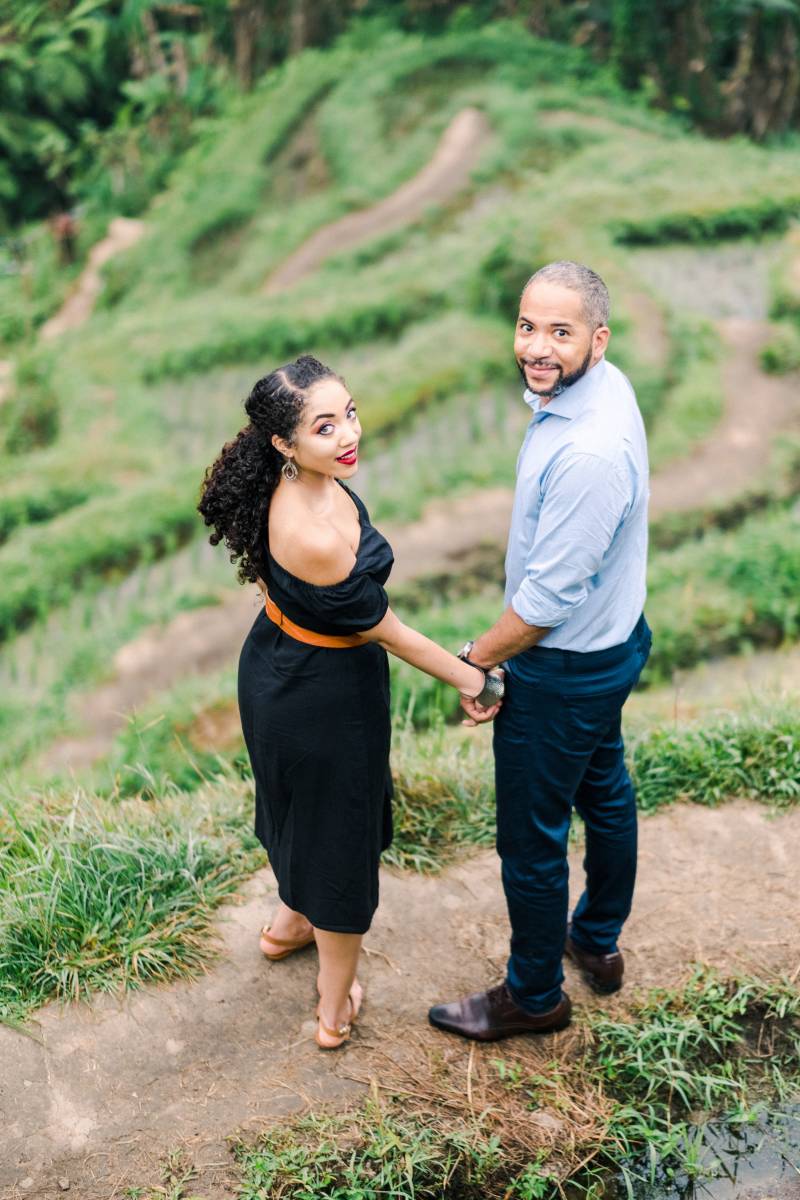 I knew Jonathan was the one after seeing over and over how selfless he is, and how he is always ready to do anything to make me happy. The second he notices any problem or worries I'm having, on his own might I add, he comes up with ways to lighten the load. He's the most caring, generous, and loving man I know, and every day he shows me why I fell in love with him all over again.

When we first met, Jonathan lived in New York City and I lived in Washington, D.C. We spent over a year taking turns traveling to see each other every weekend. After our first anniversary, I took a job in New York and moved. Once we were living in the same city, we were able to spend more time traveling to new countries together instead of crossing the Eastern Seaboard just to see each other. Over the years we've been together, we made traveling a priority. We've been to every continent together except Antarctica.

Tell us about your partner:

I love how willing Jonathan is to try new things and get out of his comfort zone. He tries new activities that I enjoy, and encourages me to have new experiences with him as well.

Jonathan always knew that Spain is my favorite country in the world, and that I hadn't had a chance to return there in years. So on our third anniversary, he flew me to Barcelona. We had a tight layover in Sweden, and we missed our connecting flight. He was furious about the missed flight, and I couldn't understand why he was so upset about a delay of just a few hours. But I later found out he had planned on proposing to me that night once we landed in Barcelona, and that our missed flight had ruined his plans! He ended up proposing in the street after dinner the following night, and then took me to Formentera (an Italian-speaking island off the coast of Spain), where we spent the rest of the week eating Italian food and relaxing on the beach. 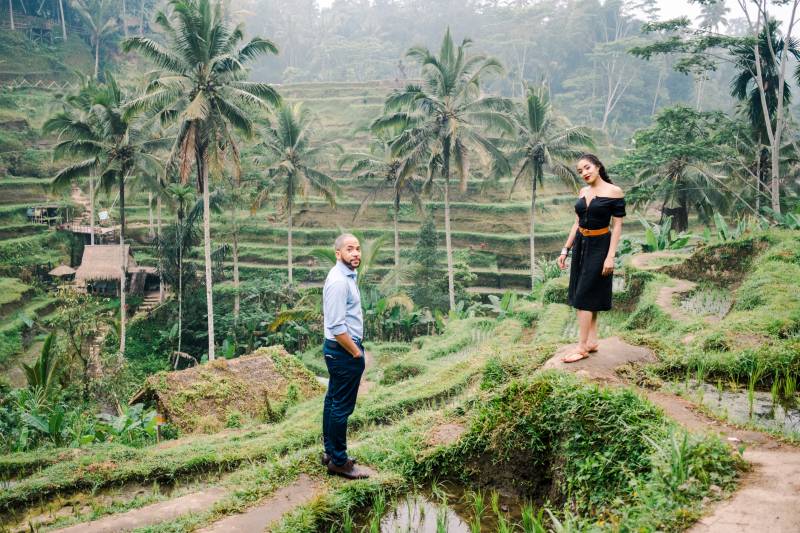 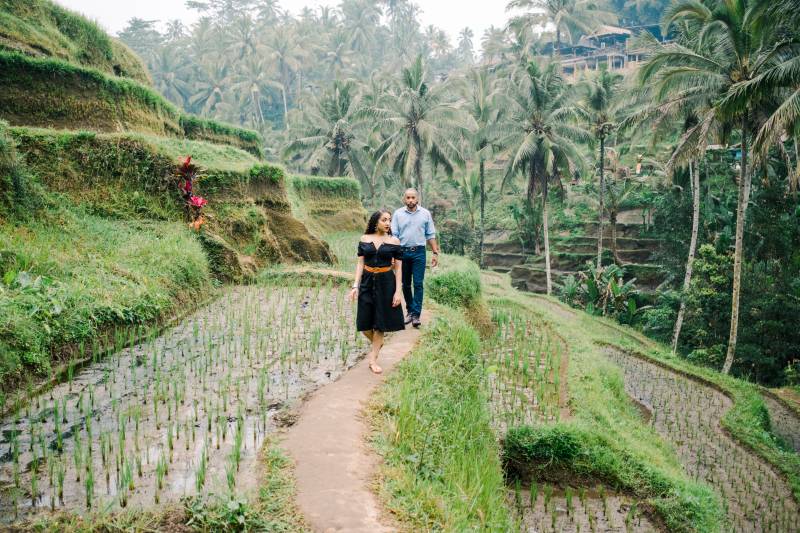 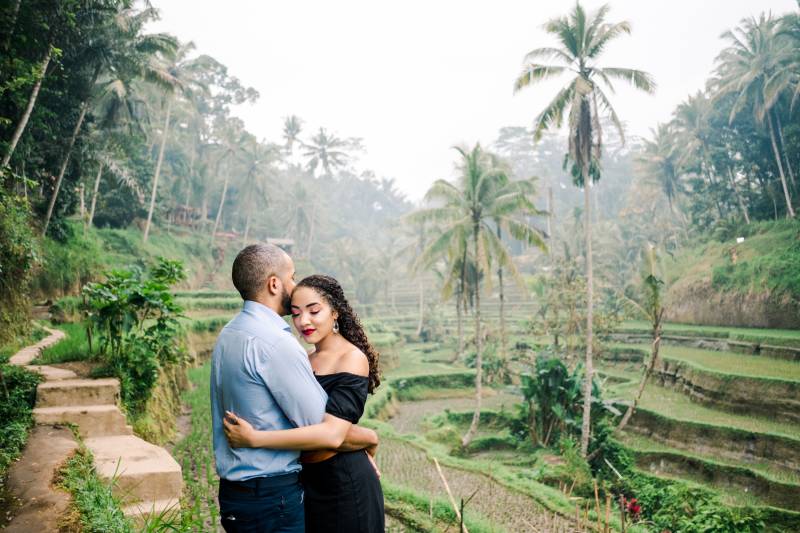 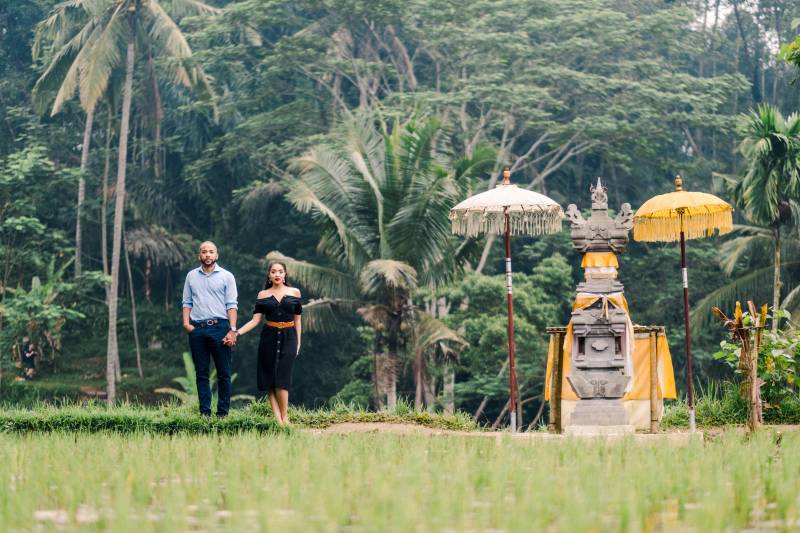 I lived by myself after law school until I moved in with Jonathan. Getting married and sharing a household has been a learning experience to say the least. I was pretty set in my way of keeping my home, so sharing space with a partner has definitely taught me about compromise and appreciating different ways of doing things.

First of all, the wife is always right! But seriously, marriage so far (and our whole relationship) has taught me what it means to be truly in love. Having a partner to cheer for you on your good days and comfort you on your bad days is the best thing that has ever happened to me. I'm so lucky to be married to my wife.

What is your most memorable moment as a married couple so far:

We're very recently married, so I can't say that there's any specific moment that has been the best. It's all been pretty wonderful so far. But I've loved spending our first winter together as a married couple and beginning to create our own holiday traditions as a family. 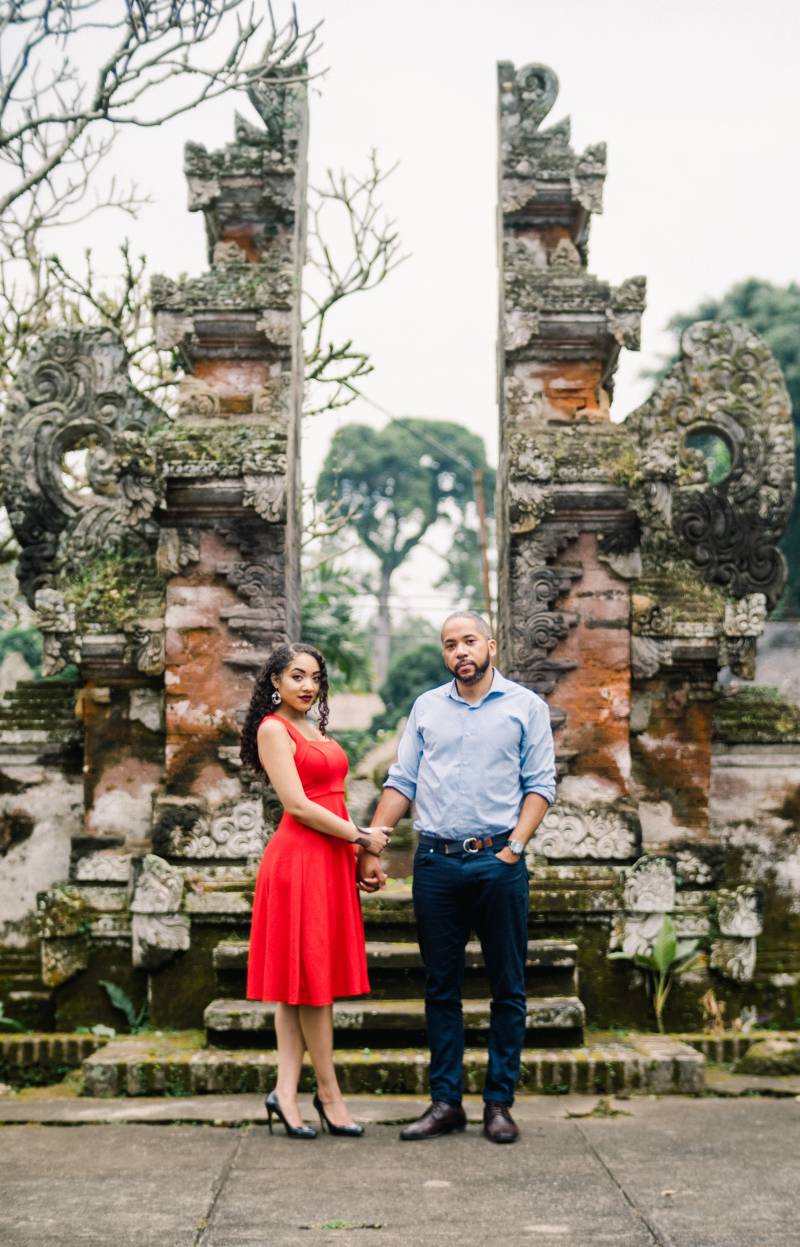 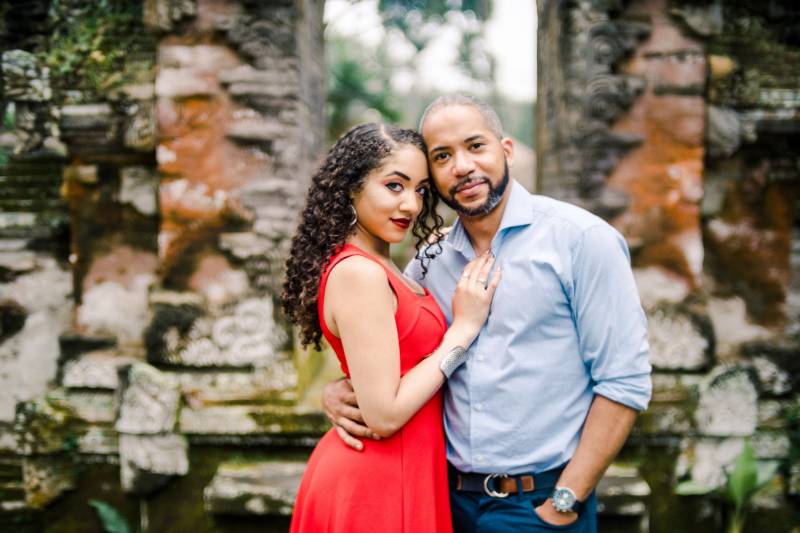 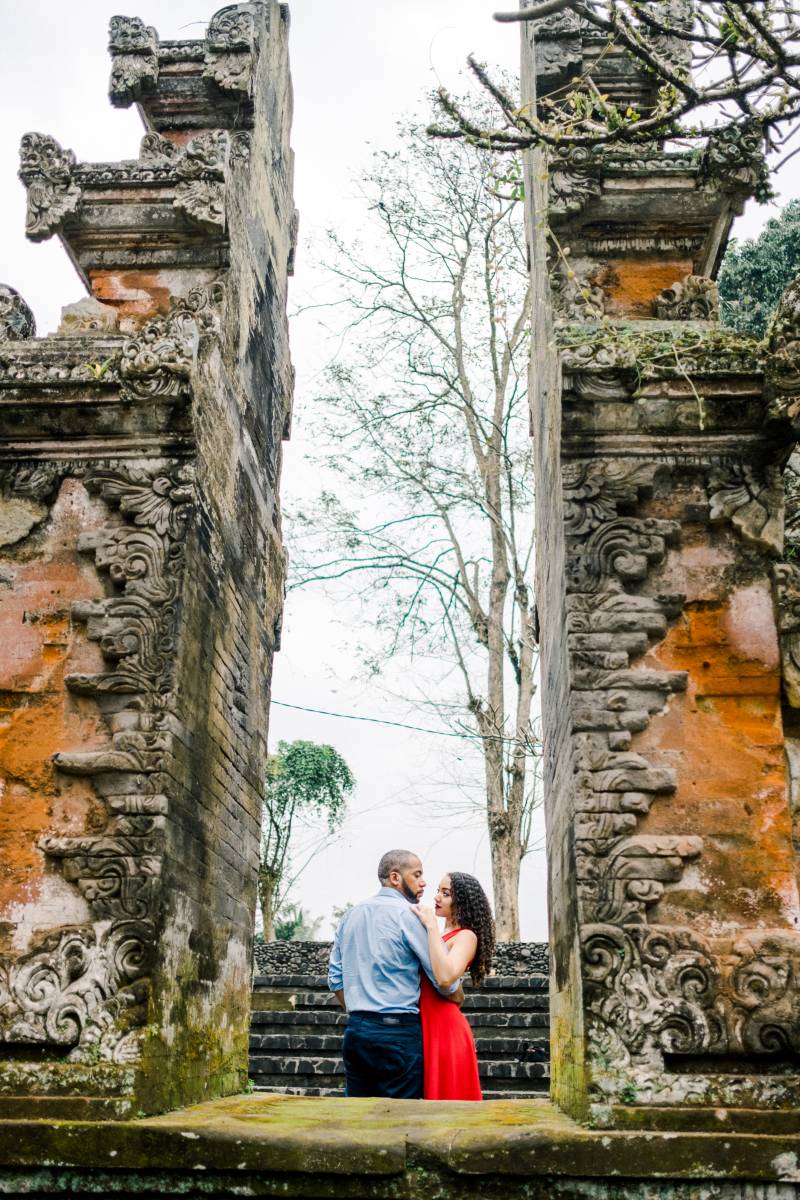 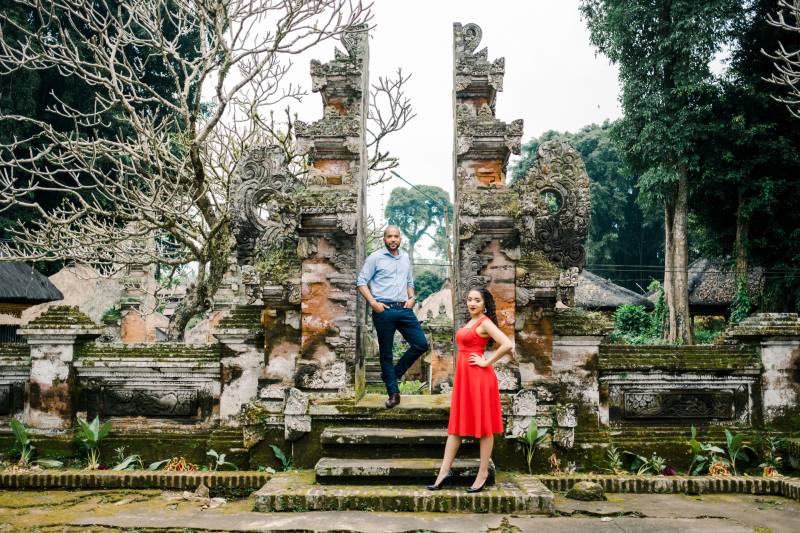 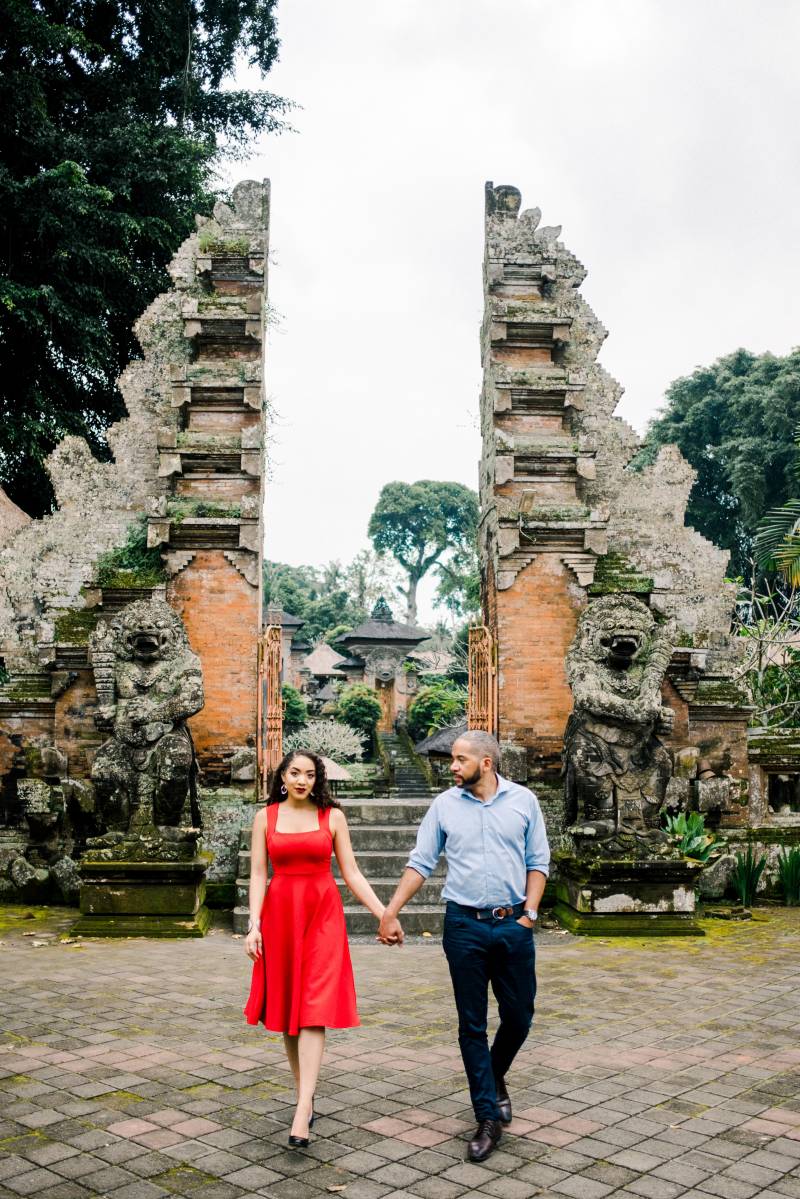 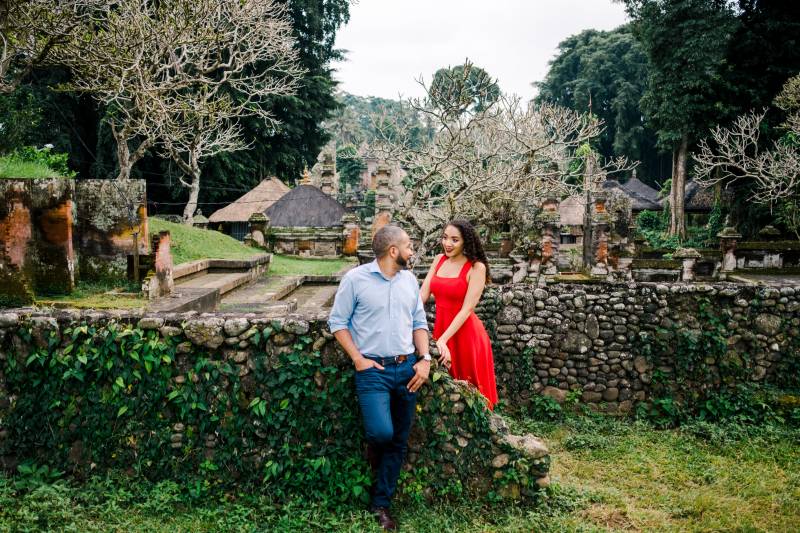 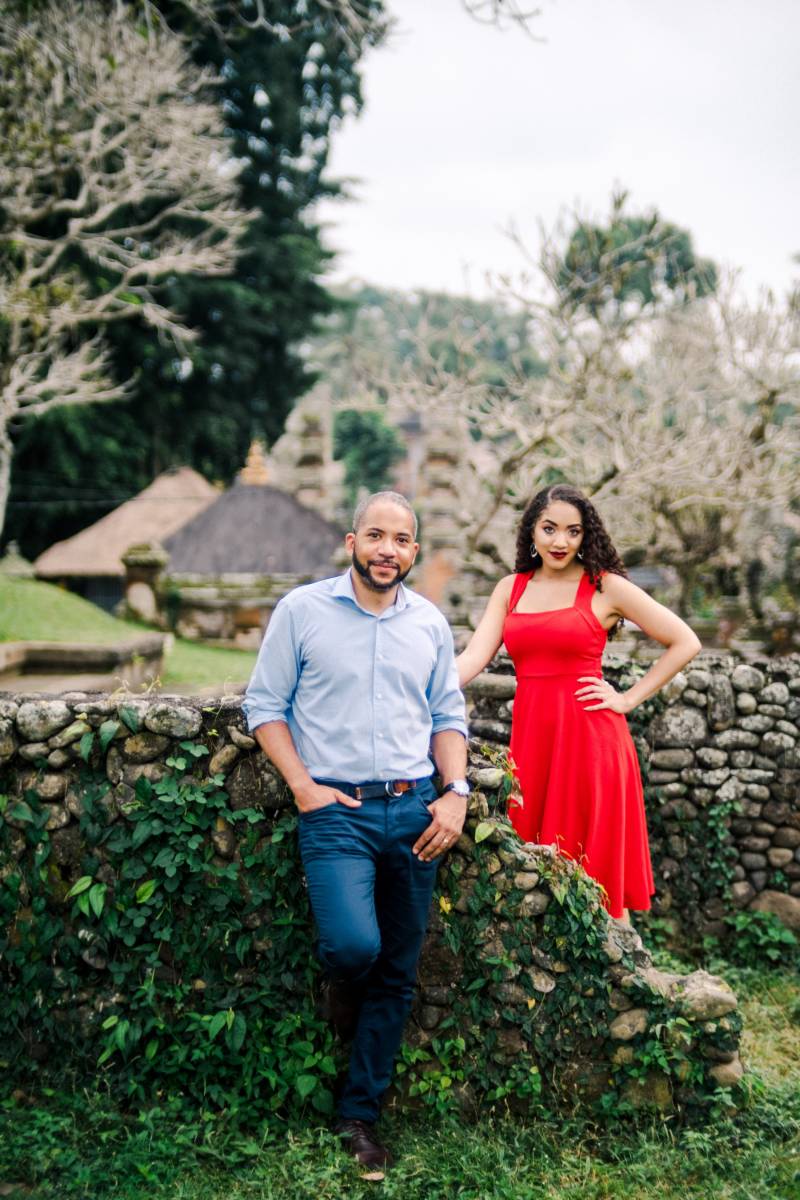 What's the best part about being married?

My favorite part of being married is having someone by my side who unconditionally loves and supports me, and always encourages me to do my best in everything. He makes my good days wonderful, and even my bad days are better because they're with him.

What's the best advice you received about marriage that you actually use?

In a disagreement, you and your partner shouldn't view each other as adversaries. Instead of seeing the issue as "You vs. Me," it's better to see it as "Us vs. This Issue." When you work together as a team to solve your problems, you realize that you are both on the same side. This has helped us re-frame any opposing viewpoints, and continues to help us productively resolve conflicts. 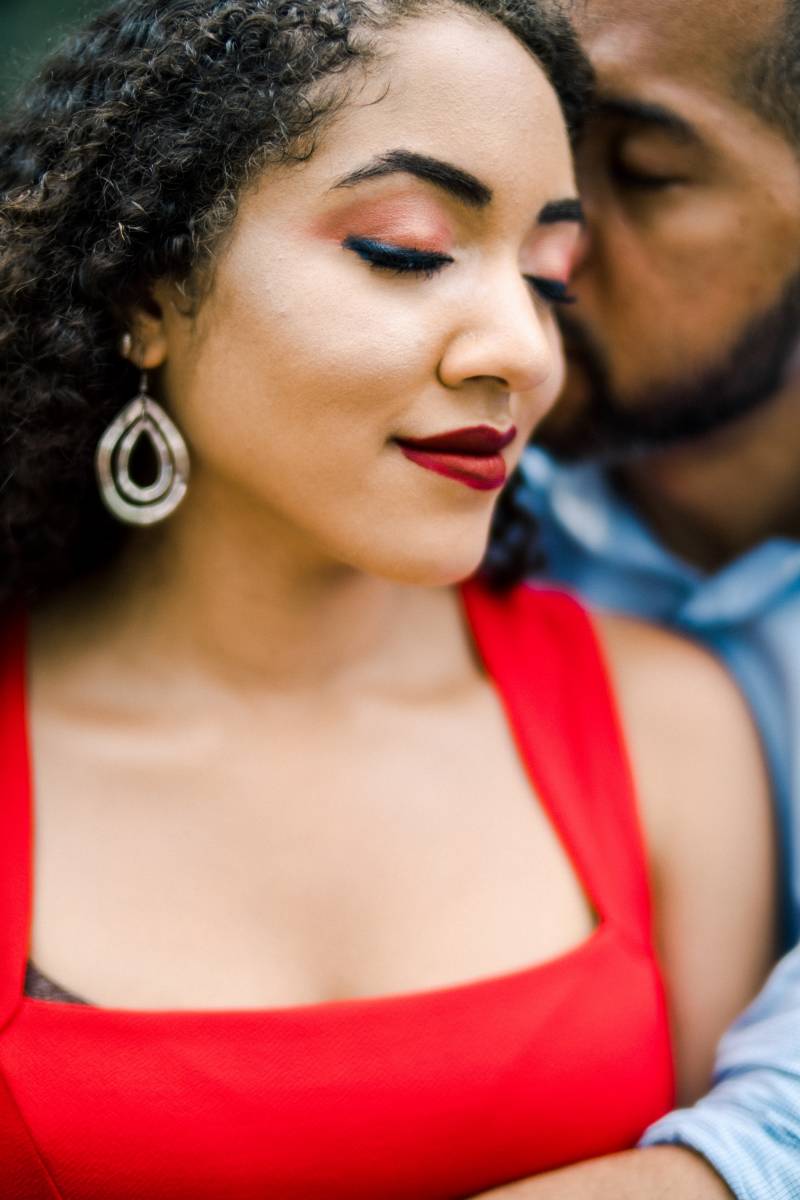 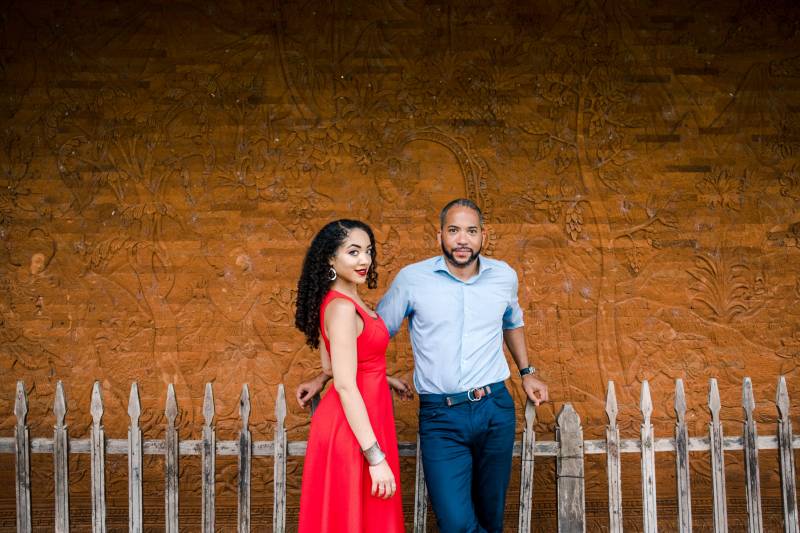 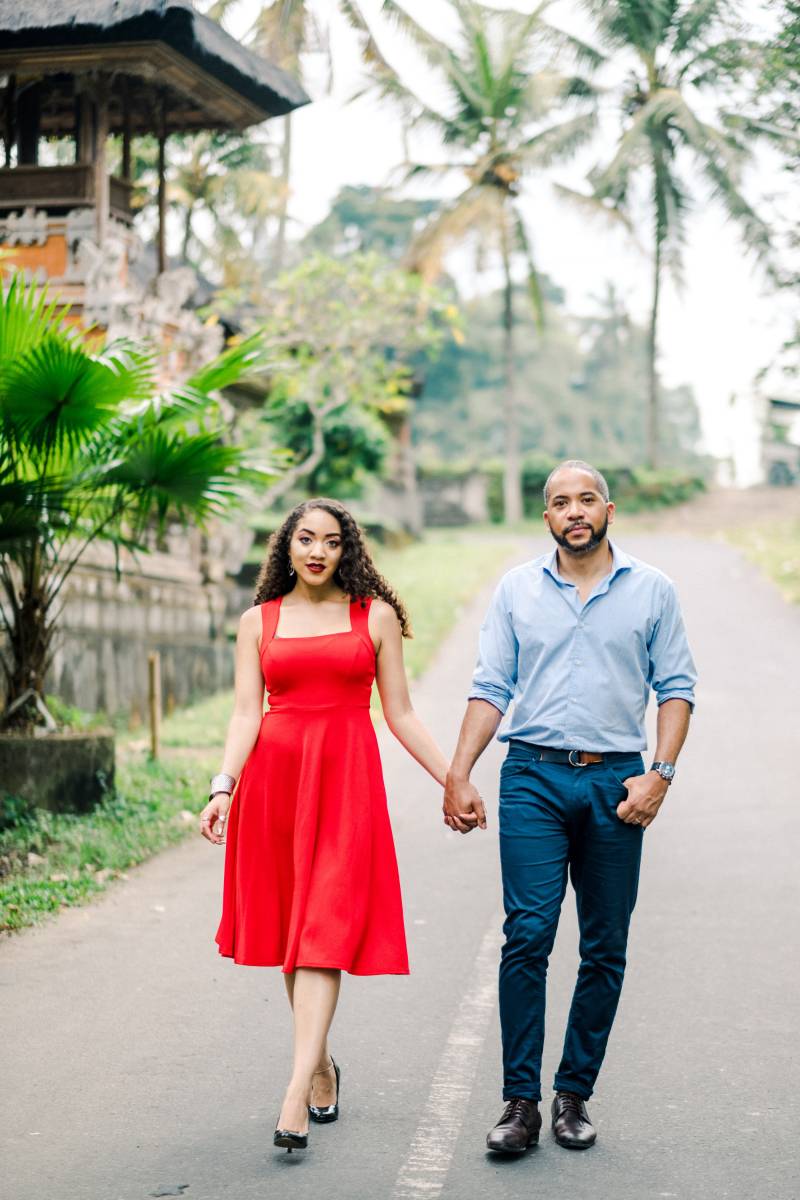 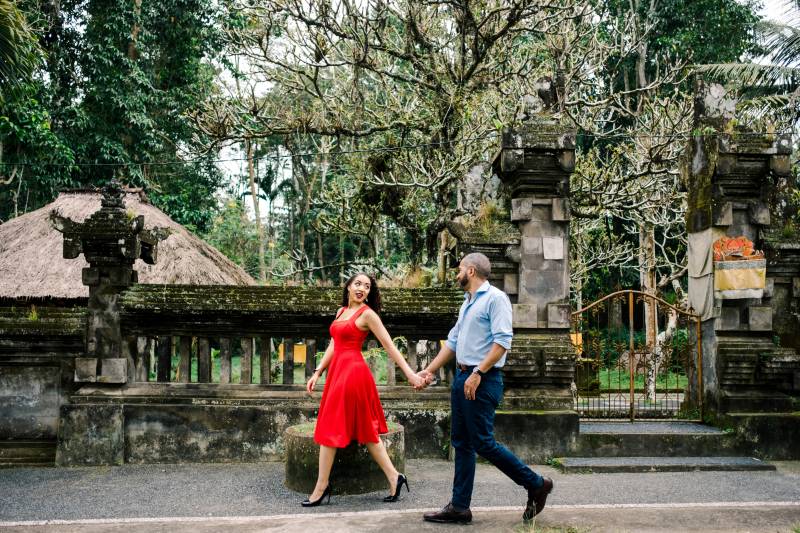 What was the inspiration behind your shoot?

Jonathan and I have been together four years, and throughout our time together we've always enjoyed traveling together. We try to go to at least a few countries together every year, so by the time we got married we had been to five continents together. Asia was one continent we were still missing, and we'd been dreaming of going to Bali for years. Bali has beautiful beaches, mountains, and lush rainforests all on one island, so that was the obvious choice for our honeymoon. We definitely wanted to capture some of the island's beautiful scenery in our photos.

Were there any memorable moments from your shoot?

We took our honeymoon photos in the famous rice terraces and temples of Ubud. These terraces are very steep and wet for growing rice, so there were definitely several times when we almost lost our balance and could have fallen. I wanted to be cute and wear heels for those photos, but when we arrived I saw there was no way that was happening! Fortunately, when we took the rest of our photos at the temple, the ground was flat and dry so I could wear my heels as planned!

How do you balance your marriage, work and family life?

We both work long hours during the week, so we always make sure to support each other during the work week and spend quality time together on the weekend.

Congratulations to the happy couple! We wish you many years of wedded bliss!

What an amazing location! So beautiful!

A Glamorous Island Maternity Shoot in the Bahamas

After the Aisle: How to Find Peace During Uncertain Times

A Classic Tropical Summer Wedding in the Bahamas