Latoia and Lamar's first meeting may be debatable, but Lamar says they first met at a club near the end of spring semester in Statesboro, Georgia while attending Georgia Southern University. One of Lamar's friends tried to approach Latoia's now Maid of Honor whom Lamar knew from high school. While Lamar's friend was attempting to get a date, Lamar took the opportunity to introduce himself. However from Latoia's recollection, the pair first met at a house party thrown for her linesisters by the Ques, one week after they crossed Delta Sigma Theta (Spring 2009). Lamar, who a few weeks earlier crossed Kappa Alpha Psi was also the roommate of Latoia's host. At one point that night, Latoia and Lamar met outside on the front deck of the house and exchanged numbers. As Neos, a bond was formed through several parties and events, and they remained friends for several months before making it official nearly a year later. Seven years later and this happy couple have been together ever since. Check out Latoia and Lamar's fashionable engagement session, captured by Andre Brown Photography. 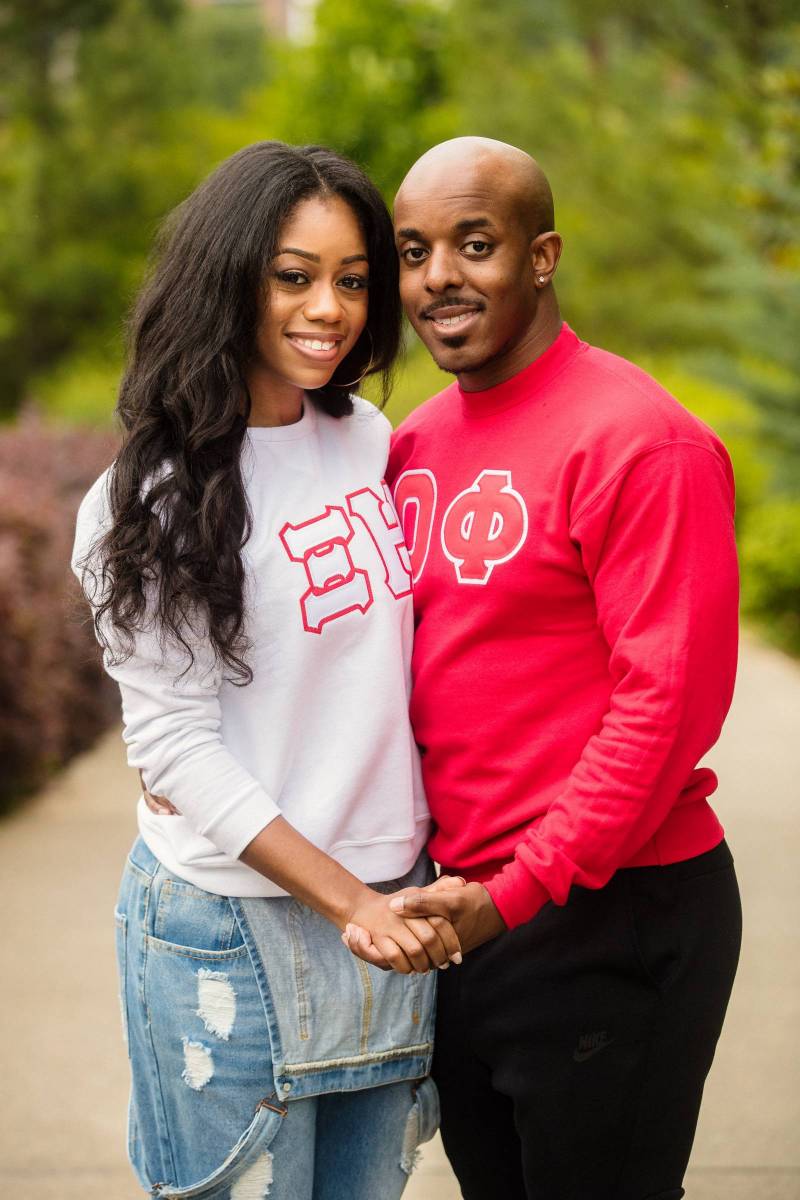 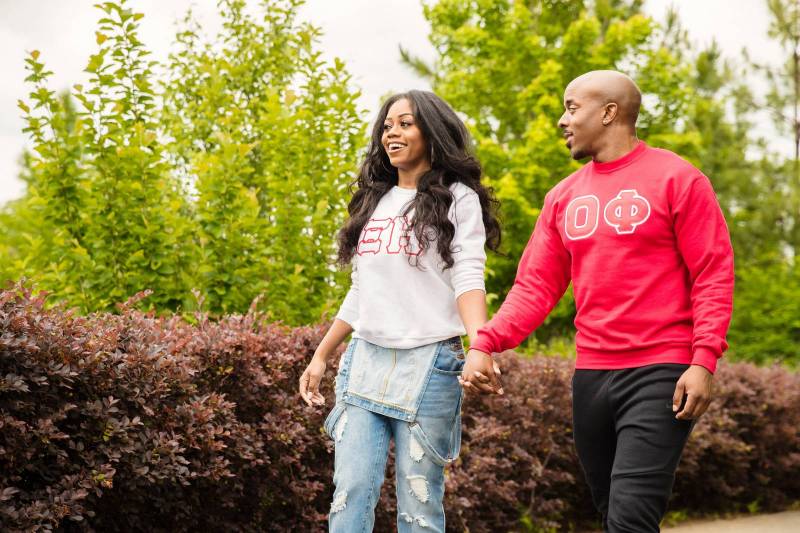 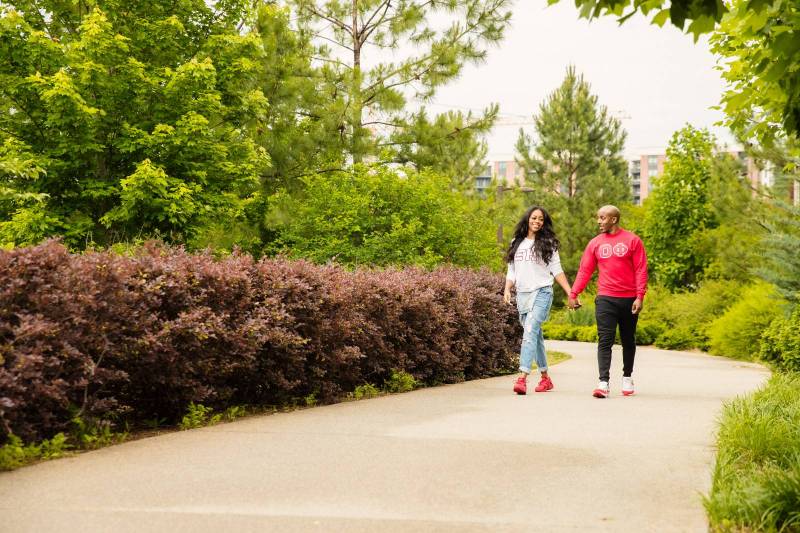 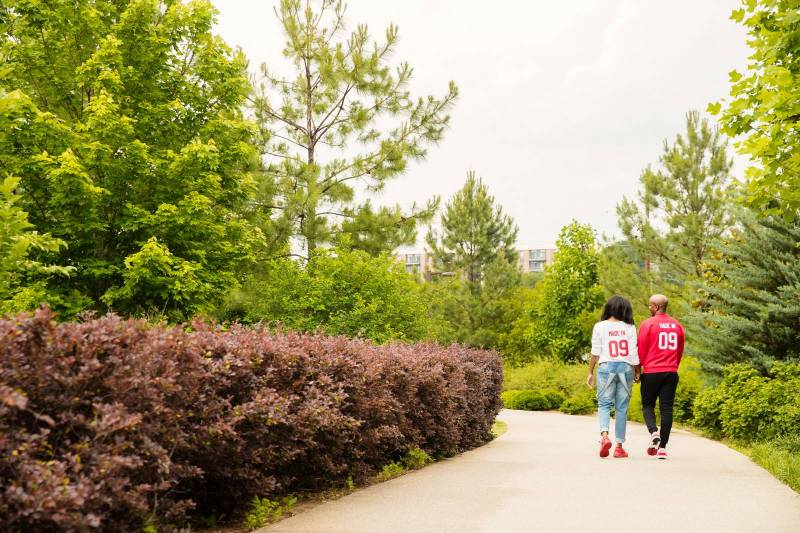 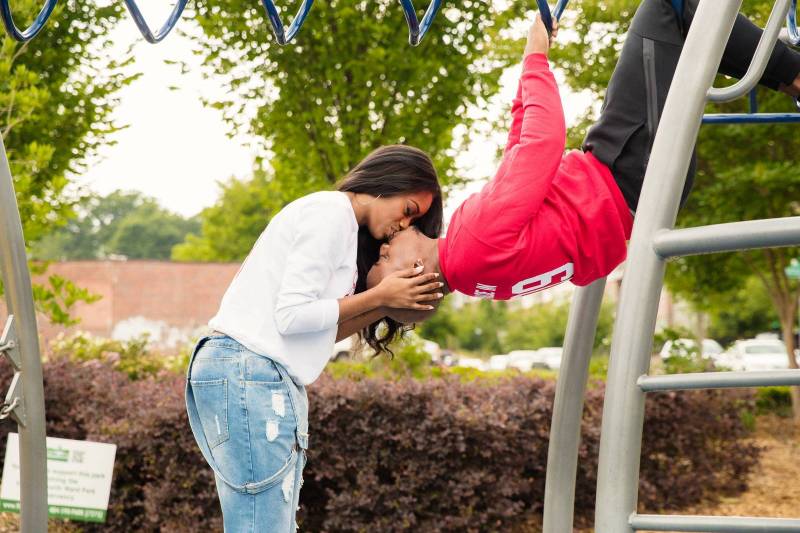 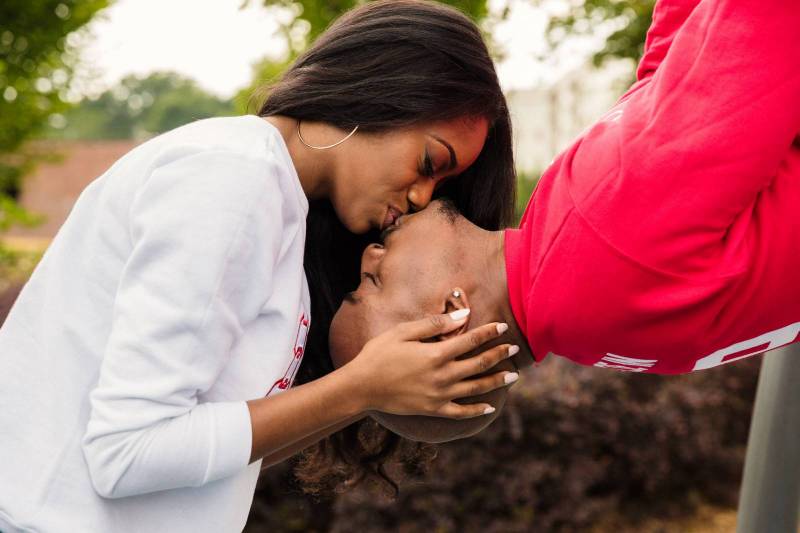 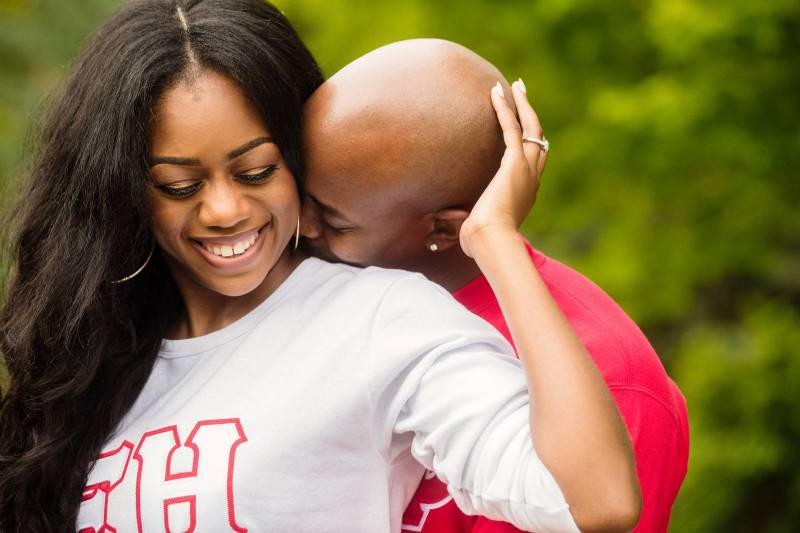 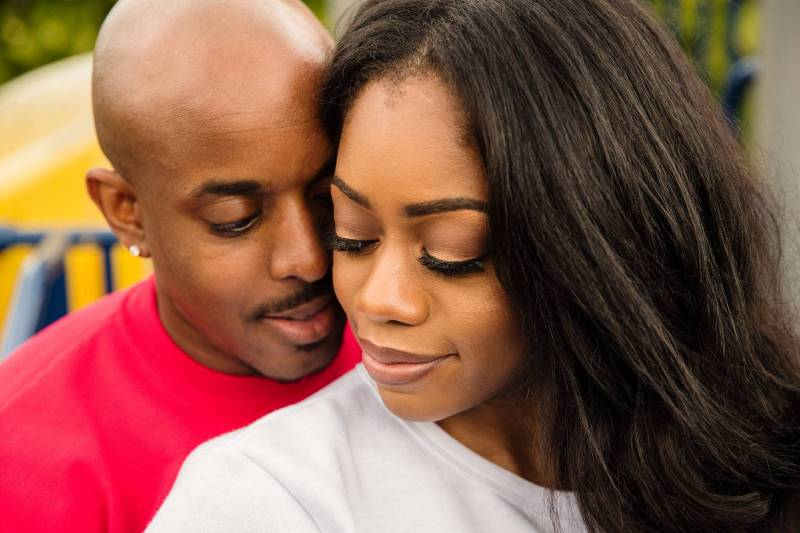 His proposal was a complete surprise! Several weeks leading up to my birthday, Lamar had asked me where I wanted to go for my birthday dinner. I always wanted to go to Skyline Park at Ponce City Market and suggested we go there. My parents had also wanted to join us, so I figured it'd be perfect for a casual night out. On Saturday, October 22, 2016, the weekend following by birthday, we went to Ponce City Market to meet my parents for dinner. We ended up running an hour late, due to my procrastination, and I strongly considered the idea of rescheduling our outing for the next day. But we finally arrived to Ponce City Market and enjoyed some burgers and fries while I opened some birthday gifts from my parents. I couldn't help but notice that Lamar was on his phone the entire time texting away and barely interacting and I was growing increasingly annoyed by his disrespect. Then he begins rushing me to finish my meal so we could go upstairs before they closed. The elevator to Skyline Park was closing in 30 minutes and I didn't see the point of paying the admission and was ready to go home. Nonetheless, Lamar convinced me otherwise and we boarded the elevator to Skyline Park. Once the elevator gates opened, I was greeted by a many familiar faces and shouts of "surprise" and "happy birthday!" In complete shock, I immediately turned to Lamar to see if he was aware of the surprise to which he quickly replied "Who do you think planned this?" Surrounded by all my closest friends, we all celebrated my birthday with rides, games, and drinks with the Atlanta skyline as our backdrop. While singing Lamar gets praises for being the best boyfriend ever, and my roommate challenges me to a game of ring toss. I was extremely uninterested in playing such a game but my competitive nature couldn't pass up the challenge. The game attendant hands me a large bucket of rings and the competition ensues. During the game, Lamar makes several attempts to tell me how much he loves me, but as a fierce competitor, I was too focused on winning to pay him much attention, nor did I notice the growing crowd encircling us from behind. As I neared the bottom of the ring bucket, I noticed a small box but dismissed it as I was more worried about only having a few rings left for a chance at winning. Clearly astonished that I hadn't caught on yet, he grabs the ring box and sets it on the counter. It is at this point that I start hearing "Let's Get Married" by Jagged Edge being played by the DJ and I finally realize what's happening. Lamar turns me to face him, says "You know I love you, right," and gets down on one knee. Unfortunately, I didn't hear much of anything after that due to my cries of joy and a rare episode of speechlessness. I honestly don't recall verbalizing any type of acceptance besides several nods and sobs, but obviously Lamar knew my answer already. Overcome with emotion, we embraced and our friends and family rushed in to congratulate us! 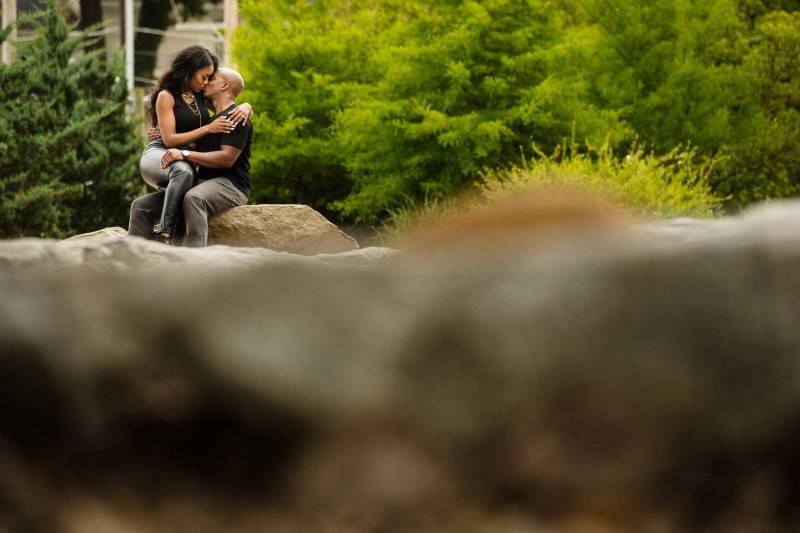 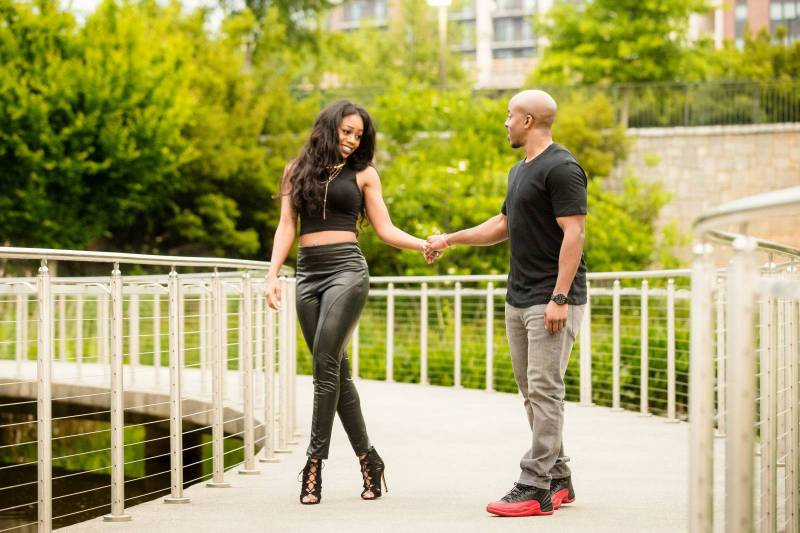 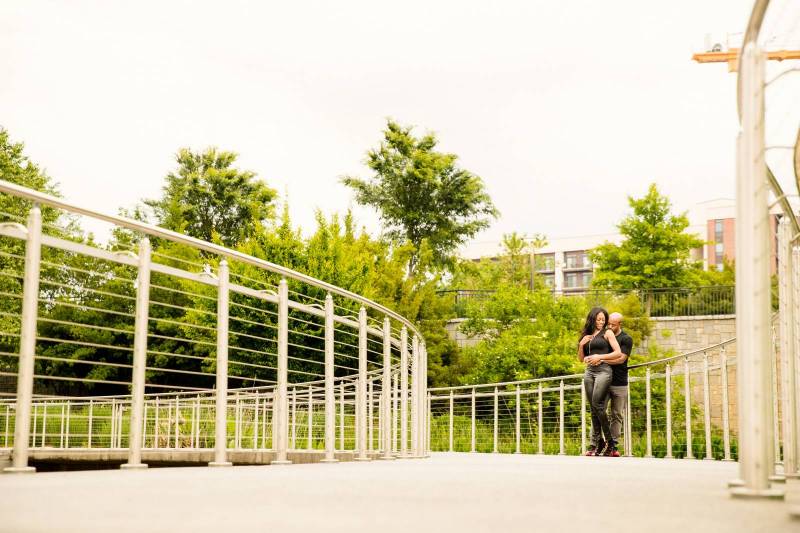 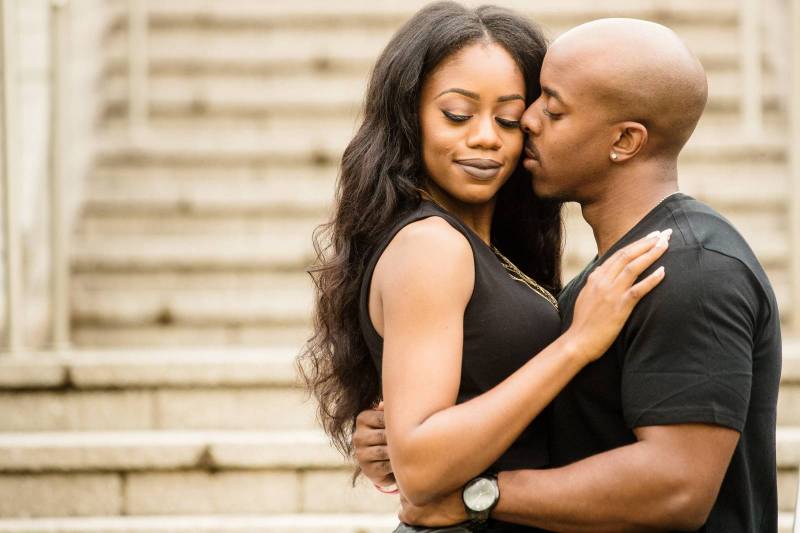 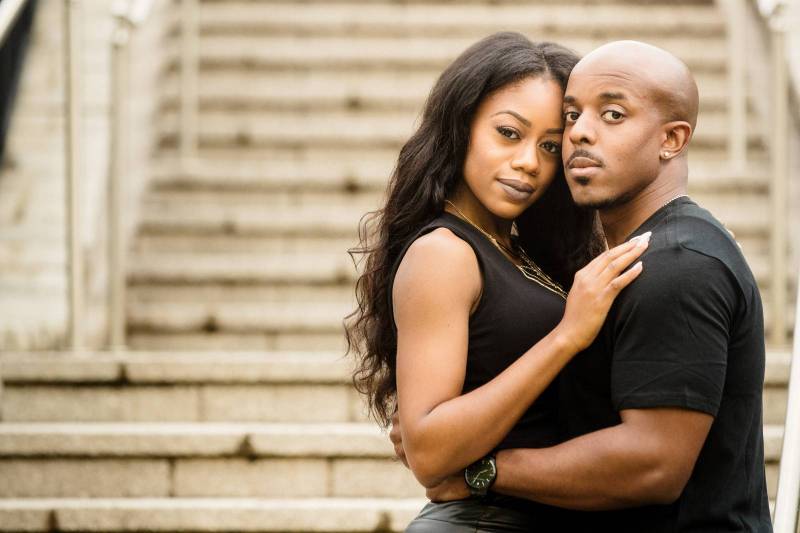 Our outfit and location changes of course! 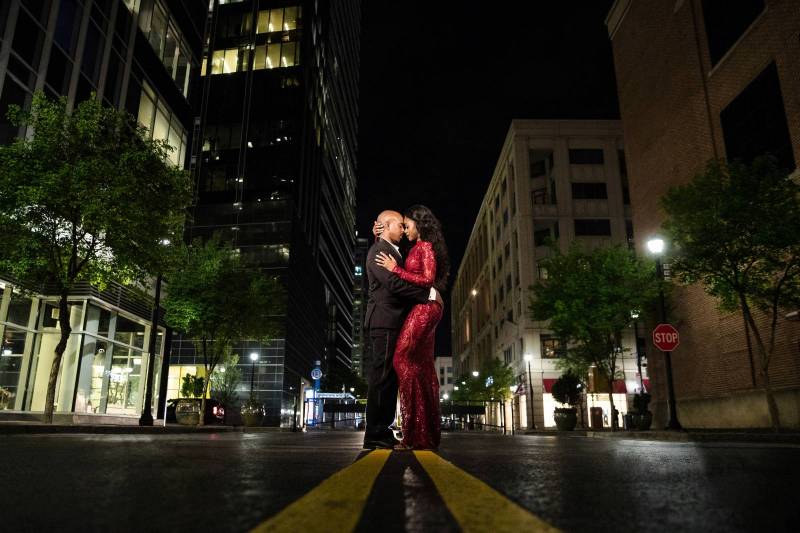 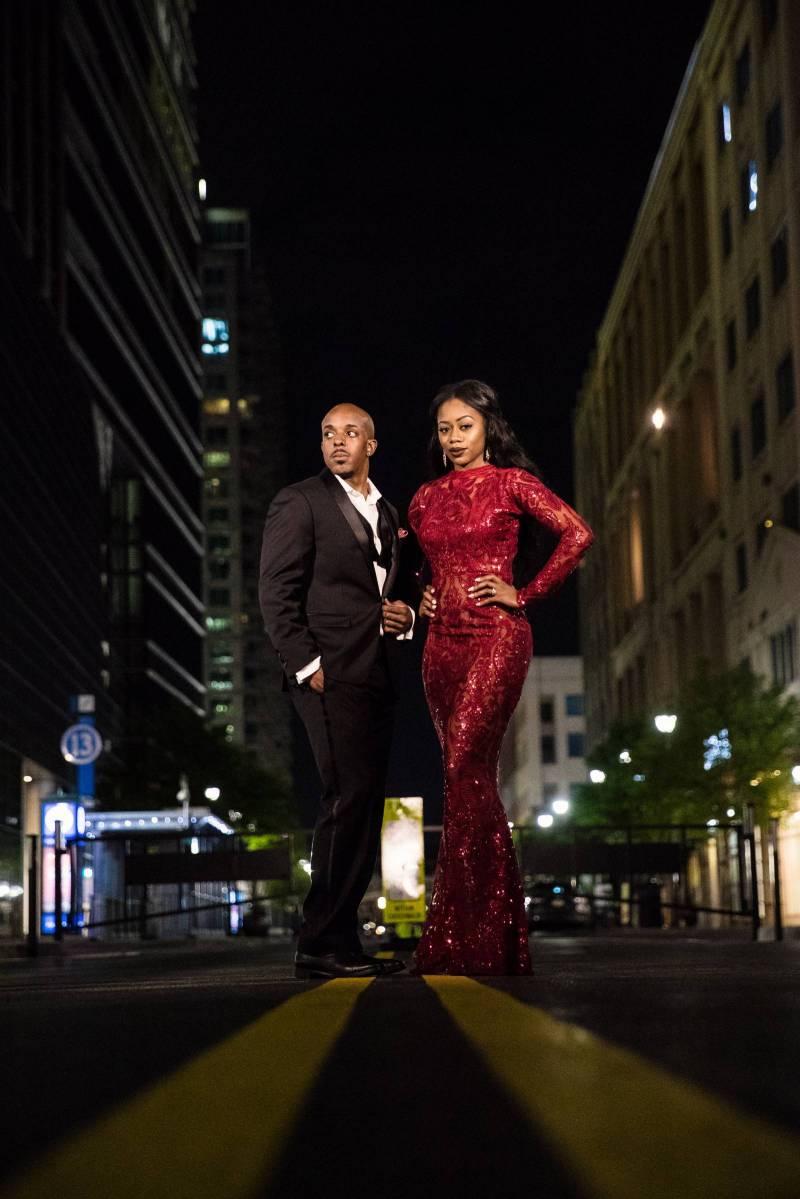 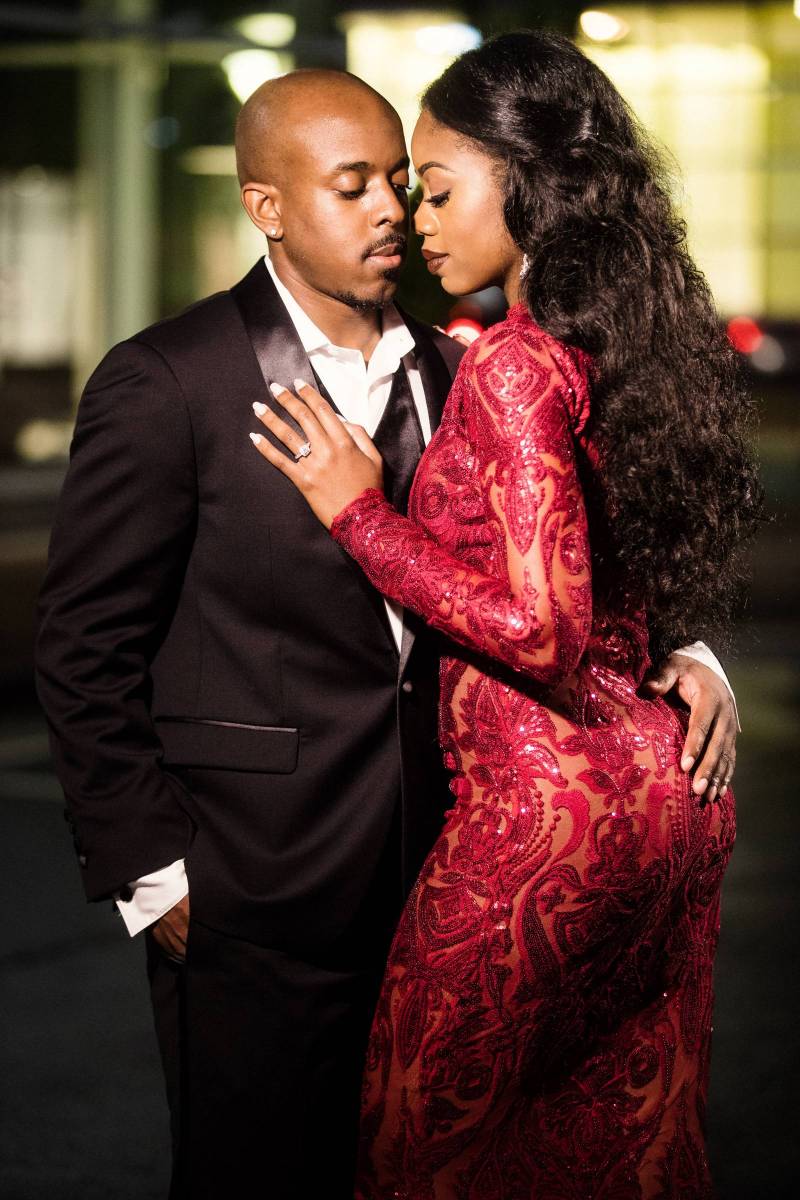 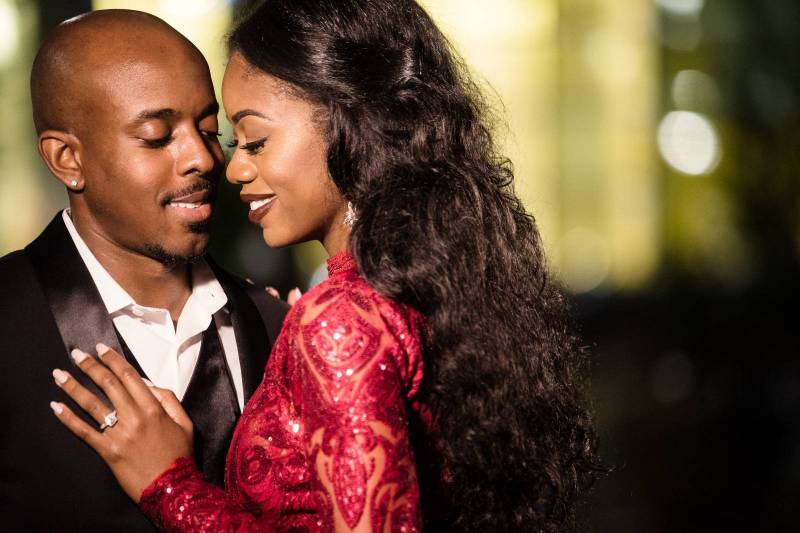 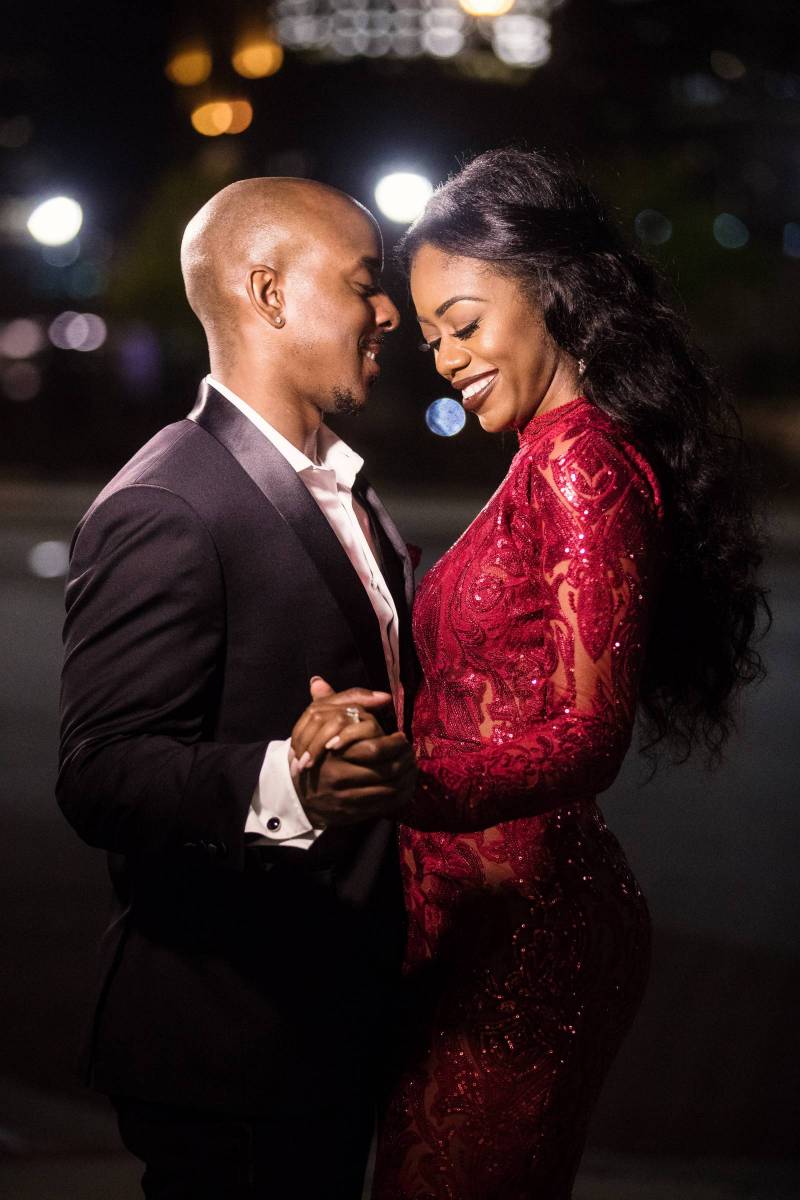 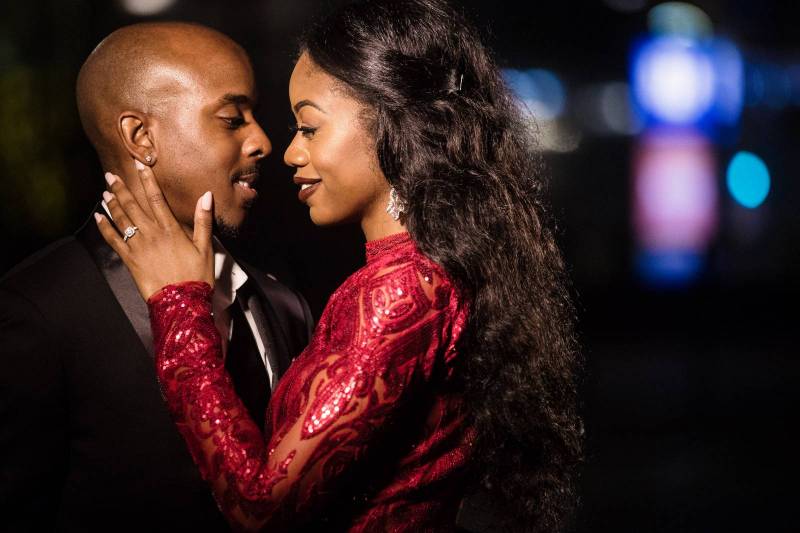 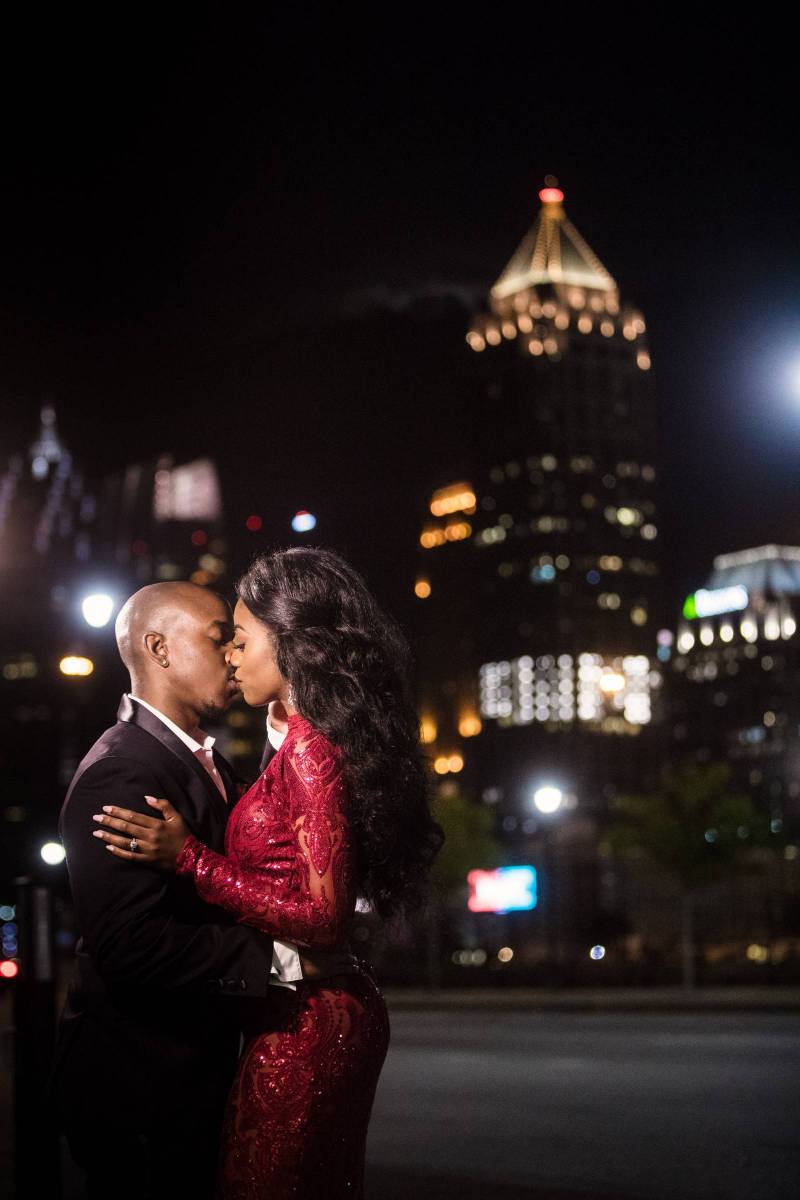 Congratulations to the happy couple! We send best wishes for your wedding day.

An Elegant Wedding in Columbus, OH