December and January are the most popular months for engagements, and tis the season to be merry or should we say marry! One could say it's spring and love is in the air, for the recent string of celebrity engagements. Janet, Brandy, and now we can add Mellody Hobson to the list of newly engaged starlets. After six years of dating "Star Wars" creator George Lucas, Mellody Hobson who is a star in the world of investment and financial banking is engaged. Hobson is the president of Ariel Investments, LLC, a Chicago investment firm managing over $3 billion in assets. It is also one of the largest African American-owned money management and mutual fund companies in the United States. Mellody is also a contributor to Good Morning America's financial segments and has received many honors. 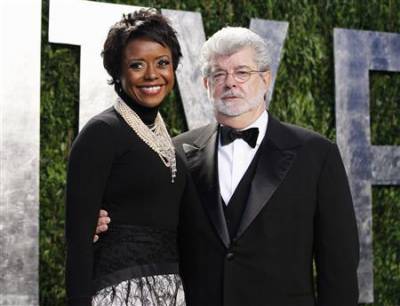 George Lucas 68, rose to fame directing the 1971 science-fiction film "THX 1138," launched "Star Wars" in 1977 developed it into one of the highest-grossing film franchises of all time. The original "Star Wars" still stands as the No. 2 film in terms of tickets sold domestically, behind only "Gone with the Wind." Lucas also created the "Indiana Jones" adventures. Lucas sold Lucasfilm and the "Star Wars" franchise to the Walt Disney Co in November for $4.05 billion.

Congratulations to the happy couple! We wish them all the best as they journey in to marriage!

No date or location for the wedding has been made public.