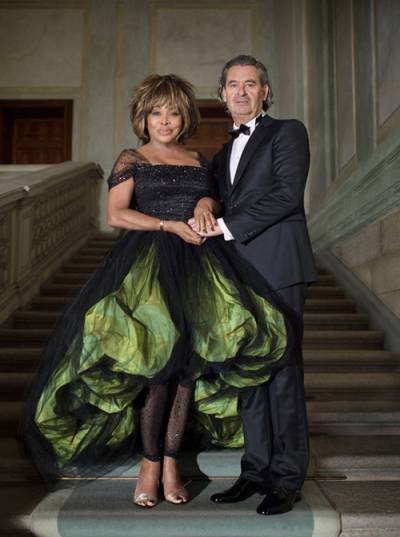 Music icon Tina Turner has married her long-term boyfriend of 27 years Erwin Bach. According to Hello magazine the lavish ceremony took place at their home near Lake Zurich in Switzerland. The sensational 73 year old superstar wore a stunning green and black silk Giorgio Armani wedding dress adorned with Swarovski crystals. Hello magazine reports that in a further break from tradition, the superstar requested that all her female guests wear white, while the men wore black tie. Tina revealed that she had first spotted her Giorgio Armani gown at a catwalk show in Beijing. "I thought, 'I gotta have that, even if I never wear it,'" she told Hello! "Then I thought, 'I know, that will be my wedding dress!"

Totally in love with what Ms. Turner told Hello about her new nuptials, she has finally reached a stage in her life that she calls her "Nirvana". "It's that happiness that people talk about, when you wish for nothing, when you can finally take a deep breath and say, 'Everything is good,'" she said. "It's a wonderful place to be."

Tina Turner: “I’ d been working on it from January, right up until the very day, and it was everything I wanted it to be, nothing went wrong, it was completely magical, and, aside from that, God gave us the most beautiful moon, which bathed the garden in this incredible light, as it shone in a clear, clear sky. That, for me was a highlight – everyone was in awe. We could not asked for more”

Congrats to the happy couple! We wish them a lifetime of love and happiness!