Congratulations goes out to basketball legend Michael Jordan! On Saturday evening he married his longtime girlfriend and ex model Yvette Prieto. He exchanged vows with 35 year old former model in front of close family and friends in Palm Beach, Fla. The wedding was held at the Episcopal Church of Betshesda By The Sea with about 300 guests. Tiger Woods, Patrick Ewing, Spike Lee and Ahmad Rashad was some of the attendees. 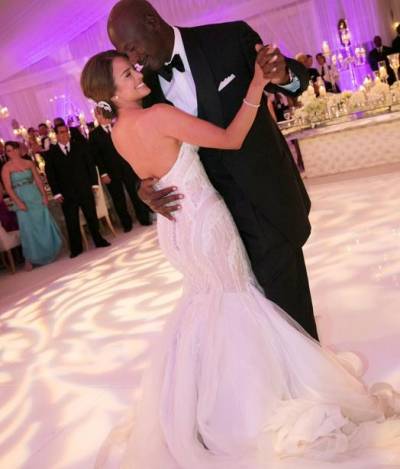 The ceremony was followed by a reception held at the Bear's Club in Jupiter, Fla at a luxurious private golf club. The bride wore a French silk voile corseted sheer sheath gown designed by J'Aton Couture embellished with Swarovski crystals. Congrats to the couple and we hear that there was also fireworks during the reception, wow!